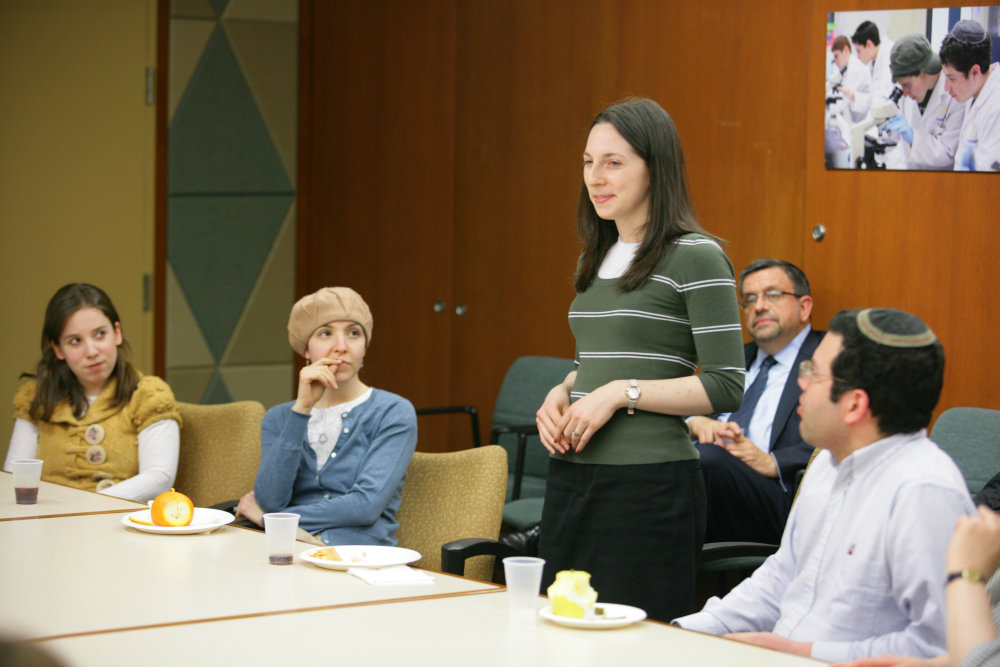 Highlights of the Shabbaton were three lectures delivered by Revel’s Associate Dean Mordechai Z. Cohen and Professor Ronnie Perelis, enjoyed by hundreds of shul-goers, at Mount Sinai Jewish Center.  Cohen’s lecture during Shabbat morning services focused on enhancing yir’at shamayim through academic Jewish studies and gave insight into his comparative work in Jewish, Christian and Muslim scriptural interpretation.  Perelis spoke about the spiritual quest of the sixteenth-century Spanish crypto-Jew Luis de Carvajal at the oneg. During seudah shelishit he spoke about Ibn Gabirol’s use of the motifs and imagery of human love in his devotional poetry to G-d.

At an informal lunch program, four veteran students discussed their chosen programs of study at Revel.

Yaakov Weiner, an M.A. student concentrating in Bible, attended the Shabbaton with his wife Ora to meet other Revel students and hear the lecture of Associate Dean Cohen, whose courses he has not yet had the opportunity to take.  “I really enjoyed the Shabbaton,” said Weiner, a Chicago native. “I liked hearing from students in tracks other than mine about their experiences, and hearing their thoughts in general.”  Weiner also said he hopes to have a continued relationship with some of the people he met.

“On a scale of 1 to 10 I would give the Shabbaton a 12,” stated Estee Goldschmidt, a Medieval Jewish History M.A. student from Moscow.  “I loved the meals and the opportunity to get to know the professors on a personal level and hear of their developments and research out of a classroom setting…I feel blessed to have been a part of it.”