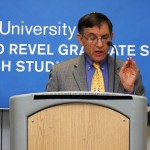 Revel was delighted to host Dr. Mark R. Cohen, Princeton University’s Khedouri A. Zilkha Professor of Jewish Civilization in the Near East, on Tuesday, November 8. The day’s events included a lunch for PhD students, a faculty dinner and an evening lecture, which drew an audience of more than 60 students and faculty.

Cohen, a well known historian of the Jews in   Arab lands in the Middle Ages, is the author of over 100 articles and reviews and several books, including Jewish Self-Government in Medieval Egypt (the 1981 National Jewish Book Award winner for Jewish history) and Under Crescent and Cross: The Jews in the Middle Ages, which has been translated into Hebrew, Turkish, German, Arabic, French, and Romanian. He has received numerous academic fellowships, lectured widely in the U.S., Europe, Russia, Japan, Qatar, Egypt and Israel, and in 2010 became the first winner of the Goldziher Prize for scholarship promoting better understanding between Jews and Muslims, awarded by Merrimack College’s Center for the Study of Jewish-Christian- Muslim Relations.
[easyembed field=”cohen”]

(View photo essay of Prof. Mark Cohen’s visit to Revel Grad School. Choose fullscreen and use arrows to navigate)
Cohen’s evening lecture, titled “Law and Society in Maimonides’ Mishneh Torah,” illuminated how certain commercial laws that were codified by Maimonides–and which perplexed later Talmudists–can be explained by looking at Cairo Geniza documents. The Geniza, with its thousands of intact Jewish writings from the tenth century and beyond, provides a window into the prevailing Jewish commercial practices of Maimonides’ time. Cohen has found that Jewish business practice was heavily influenced by conventions in Islamic commerce. 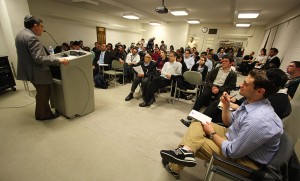 The specific example Cohen chose to illustrate this point was Maimonides’ definition of “ben bayit” (literally, a member of one’s household), in his monumental code of Jewish law, Mishneh Torah. The great twelfth-century codifier defined the term as an individual not part of the actual household, who conducted business on behalf of ba’al habayit (literally, head of household) “be- emunah” (with faith or trust).

This system–as Cohen will prove in a forthcoming paper–reflected Islamic commercial practice, in which businessmen worked cooperatively, in a sort of informal reciprocal gift-giving relationship. This system of mutual favors (as opposed to formal commercial contracts) essentially allowed investors to circumvent any possible violations of the prohibition of charging interest–lest the profits they received as a result of their monetary investments (and other people’s work) constitute interest. Maimonides, argued Cohen, instituted an oath for the ben bayit to add a more formalized element to this informal business relationship, which differed from the Talmudic method of avoiding interest-taking, known as iska. Studies such as this are part of the broader field of economic history. “There is a raging debate about the nature of cooperation, formal and informal, 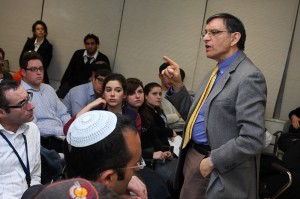 and it’s all based on Geniza documents,” said Cohen, who has been the director of the Princeton Geniza Project, an on-line database of transcriptions of documents from the Cairo Geniza, since 1986.

Although Maimonides was not the first to refer in halakhic writings to business practices based on the surrounding Arabic culture, it was he, says Cohen, “who gave the practice halakhic legitimacy in his code.”Maimonides’ innovation was in his synthesis of halakha and the reality of his time. “Rambam intertwines Islamic economy…with Talmudic agency,” said Cohen. “…[This] new territory, though unfamiliar to [later] Talmudists was very familiar to Maimonides.” 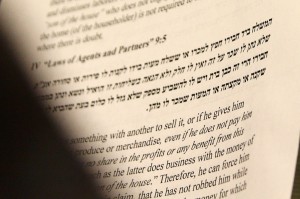 Maimonides had a particular goal in reflecting the commercial reality in his Mishneh Torah. “By updating halakha,” said Cohen, “Rambam hoped to bring the merchants into halls of Jewish justice,” rather than have them resort to Islamic courts.

The lecture was especially exciting for students enrolled in Dr. Debra Kaplan’s fall 2011 Revel course on “Charity in Medieval and Modern Times,” as the entire class recently read Cohen’s two most recent books, Poverty and Charity in the Jewish Community of Medieval Egypt and The Voice of the Poor in the Middle Ages: An Anthology of Documents from the Cairo Geniza (Princeton University Press, 2005), for their first paper assignment.