Discovering the Dead Sea Scrolls Revel in the Community, Part 1 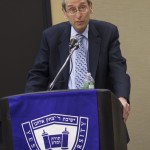 Before a gathering that included three past Revel deans and noted scholars in academic Jewish studies, co-editors   Dr. Elisheva Carlebach, Salo Baron Professor of Jewish History, Culture and Society at Columbia University, and Dr. Jacob J. Schacter, University Professor of Jewish History and Jewish Thought at YU, presented Berger with an honorary copy of the book, New Perspectives on Jewish-Christian Relations: In Honor of David Berger (Brill Academic Press). The two spoke about Berger’s substantial contributions to academic Jewish scholarship in multiple fields over the last 40 years, including the impact he has made on their own careers.

“Dean Berger opened up for me a scholarly path I had no idea existed, serving as a model of how to be a colleague and teacher in academia and how to conduct oneself when many difficult questions hang in the balance,” said Carlebach.

Schacter recalled his first academic Jewish studies class with Berger as a student at Brooklyn College: “I encountered a teacher who gave me language, categories and a sense of optimism that somehow these two worlds could coalesce,” he said. “To learn about rishonim in the college classroom for me was not just an intellectual exercise but a profound personal experience.”

The reception was hosted in the President’s Office by Dr. Mordechai Z. Cohen, professor of Bible and associate dean of Revel, who has worked closely with Berger since they assumed leadership of the graduate school in 2008. “Dean Berger has a profound vision of academic Jewish studies and its importance among the Torah U’madda community that makes YU distinct and the flagship of Modern Orthodoxy,” said Cohen.

“For YU to be YU, we needed someone of your vision, goodness, learning and scholarship to take us down the winding road that would strengthen our unique commitment to honoring Torah, honoring thought and making this a center for the world of Jewish ideas and Jewish ideals,” said YU President Richard M. Joel.

Before friends, colleagues and students, Berger reflected on his own multifaceted academic history, describing his journey as a high school student from the Yeshiva of Flatbush to a Yeshiva College graduate and Columbia PhD candidate, including his more than 35 years teaching at YU on both a part and full-time basis. “There’s something very special about YU students and the ideals for which this university stands,” said Berger. “The principle of Torah U’madda applies of course to virtually all academic and cultural fields, but nowhere does it play out more strikingly than at the intersection of Torah in the focused, traditional sense and the disciplines that go by the name Academic Jewish Studies. Many manifestations of this intersection go to the core of a sophisticated understanding of Judaism itself.”

Berger added: “To return to YU full-time in 2008 was to realize one of my central commitments in the ideal environment.”