Behind the Scenes Tours of "Byzantium and Islam: Age of Transition" with Dr. Steve Fine

At the start of the seventh century, the eastern Mediterranean—from Syria through Egypt and across North Africa—was central to the spiritual and political heart of the Byzantine Empire, ruled from Constantinople (modern Istanbul). Yet, by the end of the same century, the region had become a vital part of the emerging Islamic world, as it expanded westward from Mecca and Medina. Opening March 14 at The Metropolitan Museum of Art, Byzantium and Islam: Age of Transition represents the first major museum exhibition to focus on this pivotal era in the history of the eastern Mediterranean. 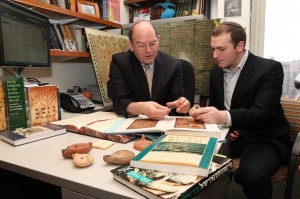 Fine and Schwartz of YU’s Center for Israel Studies collaborated with the Met on their latest exhibition.

Through some 300 exceptional works of art, the groundbreaking presentation will reveal the artistic and cultural adaptations and innovations that resulted during the initial centuries of contact between these two worlds.

The exhibition features a major catalog entry titled, “Jews and Judaism between Byzantium and Islam,” written by Dr. Steven Fine, director of Yeshiva University’s Center for Israel Studies. Fine was instrumental in the choosing and interpreting the artifacts that illustrate the Jewish experience at this important crossroads. He will present the artifacts at a lecture titled, “Jews and Samaritans in an Age of Transition” on March 18.

“This exhibition illustrates a time when our ancestors preserved their Torah lifestyle while embracing the new—living in a world that had been utterly transformed around them and transforming to meet the challenge,” said Fine. “Not only did they move from being Aramaic and Greek speakers to Arabic speakers, but for the first time manuscripts of chazal were written down. New ways of writing Biblical commentary developed as Jews began to think and write in ways similar to Moslem and Christian academics of their time.” 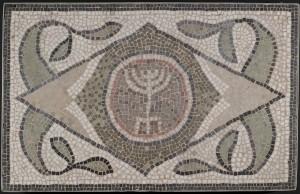 The Center for Israel Studies will also co-sponsor “Perspectives on Byzantium and Islam,” an international conference featuring noted scholars at the Metropolitan Museum of Art on Tuesday, March 20.

“The invitation to be involved in this exhibition from the conceptualization period to the present is very gratifying to me,” said Fine. “Our philosophy of Torah U’madda has infused our participation in Byzantium and Islam, where we have focused on issues that are both globally significant and show the academic rigor and expertise in Judaic studies for which YU is famous.”

Fine was assisted on the project by Yitzchak Schwartz, research associate and coordinator at the Center for Israel Studies. Schwartz, a student at YU’s Bernard Revel Graduate School of Jewish Studies, spent the last year interning at the Met.

Learn more about the exhibition and upcoming events at The Center for Israel Studies Web site.