Behind the Scenes Tours of "Byzantium and Islam: Age of Transition" with Dr. Steve Fine Knowledge of God and the Development of Early Kabbalah by Jonathan Dauber

Revel held its fourth annual Year-End Student-Faculty Reception this past May 23rd, providing an opportunity for current and new students to meet with their classmates and professors. It was also a chance to celebrate the vibrancy of Revel and our school’s events over this past year: the annual shabbaton and yom iyun, a reception marking the publication of New Perspectives on Jewish-Christian Relations in honor of Dean Berger, a first-time Revel PhD lecture series at The Jewish Center, and lectures by visiting scholars Mark Cohen of Princeton University and Debra Lipstadt of Emory University.

In faculty news: the following scholarly monographs have been published by Revel professors over the past year:

The following volumes by our faculty are forthcoming:

For more information on these and other Revel faculty publications, see the “Research” tab of the Revel website. 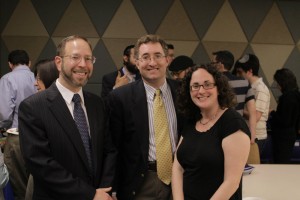 Willie Roth, editor-in-chief of the second volume of the Revel student online journal (see Volume 1 at http://yu.edu/revel/research/) announced that the work on this important student publication is moving along, but that he is still taking further essay submissions. For more information, contact willie.roth@gmail.com.

Dean Berger took the opportunity at the reception to recognize our graduates this year and celebrate their achievements. The graduates shared their future plans, some of whom are continuing their academic Judaic studies. Congratulations to the following students who have earned their MA this year who attended the reception: Ezra Blaustein, A.J. Berkowitz, Yaelle Frohlich, Estee Goldschmidt, Sara Lefkowitz, Yitzchak Ratner, Moriah Rosensweig, Yosef Rosen, Anna Sce, Gidon Shamir and Yaakov Weiner.

Representing their fellow graduates, Yaelle Frohlich and Yaakov Weiner delivered brief presentations based on their recent graduate research. Yaelle spoke about the social-cultural differences between the original Hebrew version of Bialik’s poem be-‘Ir ha-haregah (“In the City of Slaughter”) and its Yiddish translation by the poet himself. Yaakov discussed the various rabbinic interpretations of the biblical verse “an eye for an eye” and their halakhic implications in light of ancient Near Eastern and Middle Persian parallels.

The reception provided a wonderful venue to hear from our students and we wish them the best of luck in their future endeavors.