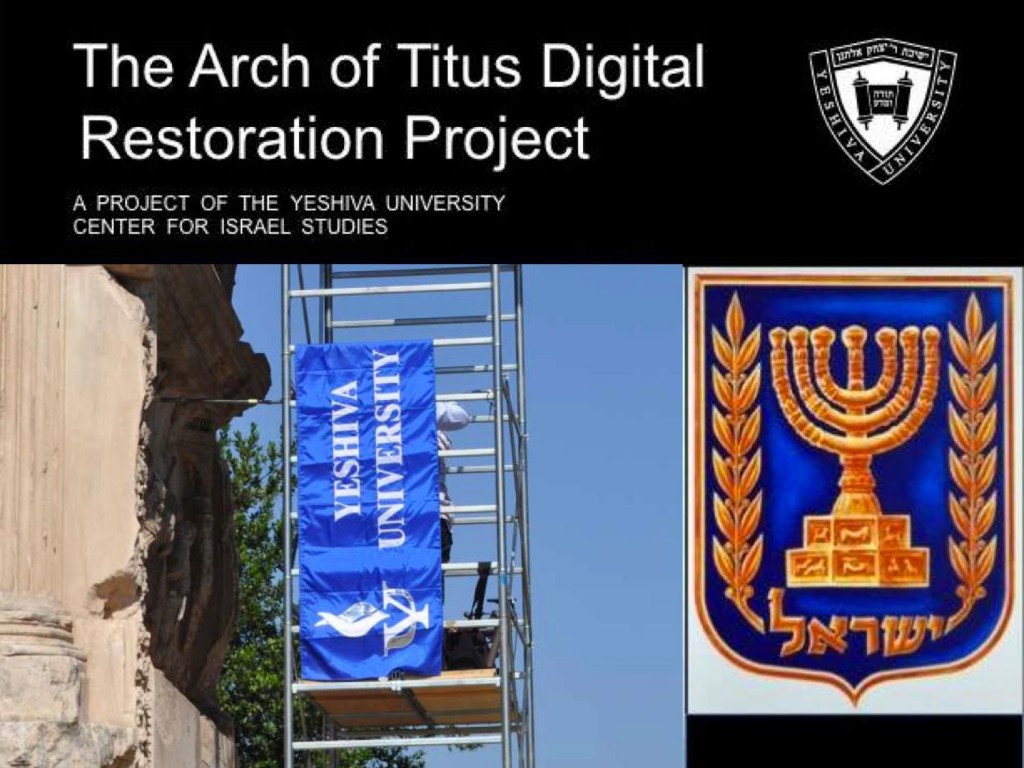 From June 5 to 7, 2012 an international team of scholars led by the Yeshiva University Center for Israel Studies in partnership with the Soprintendenza Speciale per i Beni Archeologici di Roma undertook a pilot study of the Arch of Titus in the Roman Forum, the ancient civic center of Rome, Italy. The focus of attention was the Menorah panel and the relief showing the deification of Titus at the apex of the arch.

The arch was originally dedicated after the Emperor Titus’ death in 81 CE and celebrates his victory in the Jewish War of 66-74 CE, which climaxed with the destruction of Jerusalem and her Temple in the summer of 70 CE.

The arch has three bas reliefs. One shows the deification of Titus.  Two other reliefs depict the triumphal procession held in Rome in 71 CE: in one we see Roman soldiers carrying the spoils of war through the city, including the famous Menorah (the seven-branched candelabrum) and other treasures of the destroyed Temple. These were put on display in Rome in the Temple of Peace not far from the arch. The second panel shows Titus riding in triumph through the city.

High resolution three-dimensional scans of the Menorah and the deification reliefs were made, and part of the Menorah relief was examined to determine whether any traces of paint decoration were preserved.  A Breuckmann GmbH 3D scanner was used for the data capture. UV-VIS spectrometry was employed to detect color on the marble reliefs.

The pilot project was a complete success. The scan data were processed to create a 3D representation of the form of the reliefs with sub-millimeter accuracy. Traces of yellow ochre were found on the arms and base of the Menorah.  This discovery is consistent with biblical, early Christian, and Talmudic writings and particularly eye-witness descriptions of the golden menorah by the first century historian Josephus.

Bernard Frischer said that “the success of the pilot project bodes well for achieving our overall goal of digitally restoring the arch to its original glory.  It is exciting to imagine the menorah that Jesus saw in the Jerusalem Temple.  I’m sure that amazing things are in store when we see how the rest of the reliefs were painted”

Heinrich Piening said “examining an artwork of such historical importance in an international and interreligious group of experts is a highly rewarding experience.”

Cinzia Conti  said: “The Archaeological Superintendency supported this project because studying a monument like the Arch of Titus makes it possible to appreciate how it was made and offers a better basis for protecting and conserving it.  The study of the way the reliefs were painted promises to bring the Arch back to life by showing us how it looked when it was first erected. 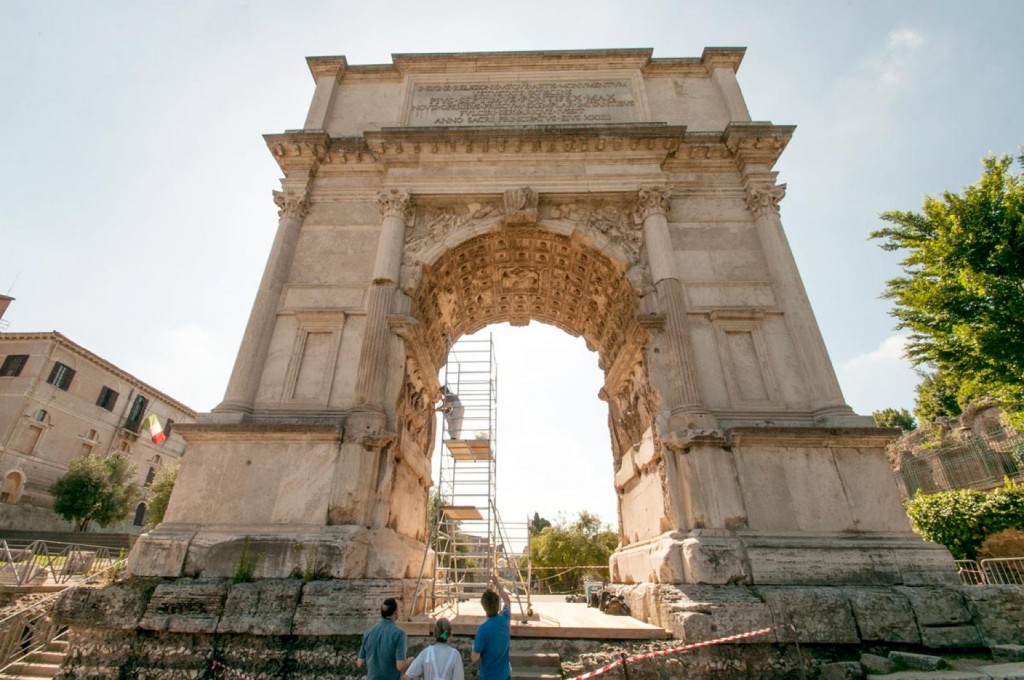 The Arch of Titus in the Roman Forum

For these reasons, we considered the pilot project highly worthwhile, and now that the results are in, a complete success.  We must proceed as soon as possible to the full study, which will give us the colors used to paint the entire Arch, and place the digitally restored Arch of Titus back into its context in the ancient city.

Steven Fine said: “The menorah on the Arch of Titus has been a symbol of Jewish resolve for 2000 years, and is now the symbol of modern Israel.  To see its original golden color again is thrilling. I can’t wait to see what we find next.”