Revel Hosts International Conference on the Thought of Rabbi Joseph B. Soloveitchik

On September 3, 2012 · In Lectures and Activities, News, Research 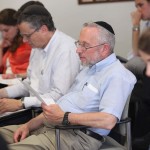 An international group of distinguished scholars convened at Yeshiva University’s Wilf Campus on Tuesday, July 31, 2012 to participate in a conference hosted by the Bernard Revel Graduate School of Jewish Studies to reflect upon various aspects of the philosophy of Rabbi Joseph B. Soloveitchik (1903-1993). The “Rav,” as Rabbi Soloveitchik was known during his long teaching career, made an indelible impact on Yeshiva University in particular, and on American Jewry in general. Now his teachings are becoming increasingly influential throughout the world Jewish community, a phenomenon that this conference aimed to explain in philosophical terms. During his lifetime, the Rav was instrumental in defining the uniquely robust Torah U-Madda (“Torah and general wisdom”) philosophy of Yeshiva University that continues to guide and inspire the school to create a special synthesis of Jewish and secular learning. Fittingly, a central objective of this conference was to clarify how the Rav’s thought related to that of other Jewish and non-Jewish philosophers. Additionally, the conference aimed to chart further directions for the continued study of his multifaceted philosophical legacy. This meeting was the second part of a two-day conference titled “Reflections on the Thought and Scholarship of Rabbi Joseph B. Soloveitchik,” the first day of which convened at Bar-Ilan University, which likewise subscribes to the Rav’s Torah U-Madda philosophy. The Revel segment on July 31 was comprised of three sessions: “Prayer, Science and Cognition,” chaired by Revel Dean David Berger, Ruth & I. Lewis Gordon Professor of Jewish History; “Biblical, Halakhic and Liturgical Interpretation” chaired by YU Professor Jacob J. Schacter, University Professor of Jewish History and Jewish Thought; and “Jewish Ethics and Metaphysics,” chaired by Arthur Hyman, Distinguished Service Professor of Philosophy at YU and former Revel Dean. Most of the speakers at the conference hosted by Revel were professors from YU, Bar-Ilan and the Hebrew University of Jerusalem. In addition, about 80 people—students, academics and lay-people—came to hear the lectures.

Dean Berger opened this event by welcoming the speakers and the audience, as well as introducing Ephraim Kanarfogel, E. Billi Ivry 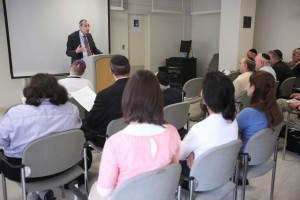 Professor of Jewish History at Revel, who organized the New York segment of this two-part conference and offered greetings. As Dean Berger noted, the “Rav” needs no introduction at YU. Yet, in the spirit of the Rav’s personal magnanimity he acknowledged the efforts of all who helped organized this conference and who are continually working on perpetuating the Rav’s scholarly legacy. Dean Berger proceeded to introduce the opening lecture by Prof. Dov Schwartz, Chair of the philosophy department and graduate program for the study of contemporary Judaism at Bar-Ilan University, in addition to serving as its Natali and Isidor Friedman Chair on Teaching the Writings of Joseph Dov Soloveitchik.  Prof. Schwartz’s paper, “New Perspectives on Prayer in the Thought of the Rav,” highlighted the Rav’s dichotomy between the subjective and objective dimensions of communication with God as seen through his philosophy of tefillah. The subjective dimension of tefillah involves man’s intellect, feeling, and volition in a dialogue with God, whereas its objective dimension is embodied in the concrete obligations of prayer. Schwartz related this to the Rav’s general conception of the halakhic man’s dual relationship with God, which entails both subjective and objective components. These insights were followed by a paper entitled “Science or Hermeneutics? Rav Soloveitchik’s Scientific Method Revisited” by Daniel Rynhold, Revel Associate Professor of Jewish philosophy and Coordinator of the PhD program. He critically analyzed the Rav’s self-proclaimed use of the scientific method in the construction of religious philosophy in general and Jewish philosophy in particular. According to Rynhold, Rav Soloveitchick’s method is more hermeneutic than scientific, raising questions regarding its objectivity. Despite this, Rynhold finds it meaningful that the Rav chose to characterize his analysis as a scientific one, since it reflects his emphasis on rooting his philosophical ideas about Judaism in the Jewish canonical texts, which serve the function of empirical data. The session closed with Mr. Alex Sztuden’s paper, “The Identity of Love and Cognition in the Thought of Rabbi Joseph Soloveitchik.” This lecture pivoted around a footnote in the Rav’s U-Bikkashtem mi-Sham in which the Rav pinpoints an identity of love and cognition apparent in what he calls “the emotional heart of logic.” Sztuden showed how the Rav distinguished this identity from external emotion, which either precedes or accompanies cognition. The identity of love and cognition in the halakhic man occurs by virtue of the fact that his emotions follow upon his religious cognition, leading to a “majestic religious experience.” 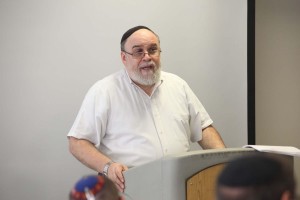 The second conference session, “Biblical, Halakhic and Liturgical Interpretation,” opened with remarks by Professor Schacter, who introduced the session’s first speaker, Prof. Ephraim Kanarfogel. In his paper, “The Rav’s Understanding of the Achievements and Role of Hakmei Ashkenaz as Reflected in his Interpretations of the Qinot,” Kanarfogel drew attention to Rabbi Soloveitchik’s fascination with the historical details relating to the lost rabbinic literature of the German Tosafists. Kanarfogel suggested that this interest reflected the Rav’s oft-cited axiom that it is necessary to be fully aware of our intellectual losses to properly mourn the destruction of the Temple and the calamities that followed. The next paper was delivered by Rabbi Dr. David Horwitz, Rosh Yeshiva at RIETS who holds the Rabbi David Lifshitz Chair in Talmud. His lecture, “The Scapegoat Sent to Azazel: Ramban, the Rav, Reinterpretation and Repentance,” delineated the differences between Maimonides’ psychological approach and Nahmanides’ ontological approach to the function of the scapegoat (seir la-azazel) on Yom Kippur. Maimonides maintains that the scapegoat ritual is intended to influence the mindset of the sinner, who is led to believe that his sins have been symbolically thrown off a cliff. Nahmanides, on the other hand, citing the midrashic work Perki D’Rabbi Eliezer, explains the scapegoat kabalisticaly as a bribe to Samael, i.e., Satan.  Horwitz further explained how the Rav, in his Al ha-Teshuvah, reconciled Nahmanides’ kabbalistic approach with the rationalistic mindset. Dr. Shira Weiss, Adjunct Instructor of Jewish Philosophy at YU’s Stern College for Women then delivered a paper entitled “Biblical Hermeneutics in the Philosophy of Rav Soloveitchick: Exploring the Influence of R. Yehudah ha-Levi.” Weiss noted that although Rabbi Soloveitchik is commonly understood through the lens of Maimonidean thinking, he manifests ha-Levian inclinations. Whereas Maimonides advocates a cosmological, intellectual relationship with God, ha-Levi emphasizes the experiential relationship developed through action. Drawing upon the Rav’s use of the Kuzari in Kol Dodi Dofek, The Lonely Man of Faith, and U-Bikkashtem mi-Sham, Weiss showed that the Rav follows ha-Levi in accounting for the Jewish model of man’s relationship with God in terms of the performance of mitzvot, rather than pure intellectual speculation.

The conference concluded with a session on Rabbi Soloveitchik as he relates to “Jewish Ethics and Metaphysics.” Professor Arthur 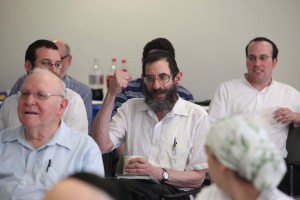 Hyman opened the forum and introduced Rabbi Shalom Carmy, Assistant Professor of Jewish Philosophy and Bible at Yeshiva University, and current Chair of the Bible and Jewish Philosophy departments at Yeshiva College. Rabbi Carmy is also the Editor of Tradition and an affiliated scholar at Cardozo Law School of Yeshiva University.  In his paper, “Notes Toward the Interpretation of the Emergence of Ethical Man,” Carmy noted that, at first glance, the Rav’s essay The Emergence of Ethical Man seems to have no real theme. Yet Carmy recalled the Rav’s claim to have written this essay to be “an entire book about how Moshe became Moshe.” On this basis, he argued that this work explores the nature of man in historical terms.  As Carmy demonstrated, The Emergence of Ethical Man is a diachronic text: it begins with Adam, a prehistoric being; it then examines Avraham, a man who reaches the truth without revelation; and then, finally, it contemplates Moshe, a figure forced into divine leadership, who becomes the ultimate “Ethical Man.”  Dr. Avinoam Rosenak, Senior Lecturer and Chair of the Department of Jewish Thought at the Hebrew University of Jerusalem, then presented his paper, “The Thought of Rabbi Joseph B. Soloveitchik: A New Inquiry in Light of Martin Heidegger,” which showed how Heidegger’s conception of “earth” as articulated in his essay “The Origins of the Work of Art,” can be traced in the Rav’s thought.  Heidegger understands “earth,” like death and art, as defying our attempts to fully elucidate its nature.  Heidegger distinguishes “earth” from “world,” a notion within which humans force some intelligible order onto nature so as to make sense of their environment. Although our world is full of philosophical and theological attempts to give discursive meaning to our endeavors, Rosenak highlighted the ways that the Rav, in his philosophical-theological works, confronts earthly matters without reducing them to worldly meaning. The conference concluded with Professor David Shatz’s lecture, “Contemporary Scholarship on the Rav: Where We Are, Where We Can Go.” 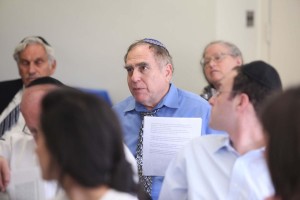 Shatz, Professor of Philosophy at Yeshiva University and Editor of the Torah u-Madda Journal, provided concluding reflections on the two conferences and on the state of scholarship on the Rav in general. He first noted that academic scholarship on the Rav has grown dramatically, and suggested several explanations for this heightened interest. He then illustrated how the scholarship has provided a more contextualized, more comprehensive, and more critically engaged understanding of the Rav. However, he also pointed to gaps that remain to be filled, both in interpreting the Rav and in applying his philosophy to a changing world. As this conference made clear, we are starting to see scholarship on Rabbi Joseph B. Soloveitchik extend beyond the Modern Orthodox world, as an increasing number of academics become acquainted and fascinated by his work.

This is only the beginning. Plans to publish the content of the conference lectures are underway.

The above is an academic summary of the conference on Rav Soloveitchik hosted by Revel on July 31, 2012. A more general article was posted on the YU News Blog and copied on the Revel Blog soon after. The essay below is by Rivka and Steven Skaist. Rivka is currently a Revel MA student. Photos courtesy of V. Jane Windsor.