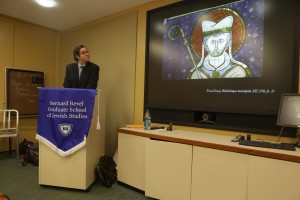 On Thursday, October 25th, Andrew B. Kraebel of Yale University spent the day as the first visiting scholar of the year at the Bernard Revel Graduate School of Jewish Studies, having been invited by Revel’s Associate Dean Mordechai Cohen. Now completing his PhD, Mr. Kraebel has already published a number of important studies on Christian Bible exegesis that have established him as a respected scholar in the field. In fact, he participated in the international research group of fourteen distinguished scholars on Jewish, Christian and Muslim interpretation of Scripture that Dean Cohen directed at the Institute for Advanced Studies of the Hebrew University of Jerusalem in 2010/11. “Andrew’s research provides a valuable supplement to Revel’s offerings in parshanut ha-miqra (Jewish Bible interpretation),” Dean Cohen remarked, “since it provides insight into the cultural and intellectual world of Jewish commentators in Christian lands, such as Rashi and Rashbam.”

At Revel, Mr. Kraebel presented his scholarship in three venues: a PhD luncheon; a dinner for students, faculty and alumni; and a lecture open to the community.The success of the PhD luncheon was reflected, in part, by its excellent attendance: over twenty of Revel’s current tally of thirty doctoral students, in addition to Revel Deans David Berger and Mordechai Cohen, as well as Revel’s PhD Program Coordinator, Professor Daniel Rynhold. By itself, the luncheon illustrated the dramatic growth of Revel’s doctoral program, which had just nine students in Fall 2008, when Dean Berger assumed the helm of Revel. The Dean made it his priority to create a vibrant community of academic Jewish scholarship at the graduate school by expanding the PhD program. 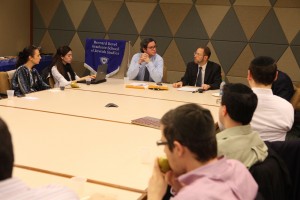 Tailoring his luncheon presentation to his audience, Mr. Kraebel shared the substance of his own (now nearly complete) dissertation, making it of special value to the Revel’s doctoral students. As with any first-rate dissertation, Mr. Kraebel’s identifies a shortcoming in current scholarship that he aims to rectify through his original research. Generally speaking, there are two types of works of medieval Christian Bible interpretation: commentaries on individual books, and treatises that lay out theories of interpretation. Though scholars have typically focused on the latter, Mr. Kraebel argues that more work needs to be done to delineate the traditions of Christian interpretation relating to individual biblical books, which often apply substantially different methods. Mr. Kraebel provided examples that illustrate this distinction, showing how the Christian notion of the mystical and spiritual (Christological) vs. literal senses of Scripture play out differently in poetic books such as the Psalms, and in the historical books such as Kings. Kraebel then turned to the audience and asked if they have encountered a similar book-by-book distinction in the application of Jewish theories and methods of interpretation. Some examples were proffered by the audience: the Song of Songs, which is interpreted allegorically even by staunch pashtanim (literalists), and the book of Job, on which there is a distinctive Jewish philosophical tradition of interpretation—unparalleled in other biblical books.

The evening program began with an informal buffet dinner in the President’s Boardroom in Belfer Hall, attended by around 45 Revel students, alumni, and faculty—making it a wonderful opportunity for members of the Revel community to socialize. At the dinner Mr. Kraebel enjoyed meeting many new people, and then spoke in a relaxed way to the dinner guests about his academic background and interests. He was first introduced by Dean Cohen, whose glowing comments, followed by Mr. Kraebel’s similarly warm response, illustrated the mutual respect and affinity of the two scholars. In his introduction, Dean Cohen recalled fondly how the two of them would sit together in Jerusalem for hours at a time at the Hebrew University café and compare their respective medieval commentators, sometimes revealing fascinating parallels. 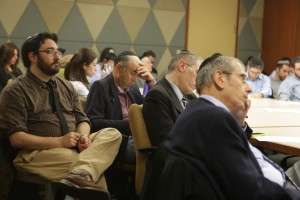 For his part, Mr. Kraebel recalled a public lecture that Dean Cohen gave in Jerusalem on medieval Jewish interpretation in its Muslim and Christian cultural contexts (summarizing the findings of their above-mentioned research project) and was amazed by the large crowd attending the event. “It was impressive to witness the substantial interest that medieval Jewish commentators still hold in modern Jewish Bible study,” he remarked. “By contrast, typically only specialists in medieval studies show any real interest in the eleventh and twelfth-century Christian interpreters that I study.” Mr. Kraebel, of course, is one of those specialists, and manifests a passion for understanding his interpreters—not unlike the dedication some YU students display in studying the rishonim (medieval Jewish scholars).

The highlight of the evening was Mr. Kraebel’s public lecture, “How did Rashi’s Christian Neighbors Interpret the Bible?” attended by around 65 people, including those at the dinner, as well as YU undergraduates and visitors from other schools. Mr. Kraebel enlightened the assembled guests with the history of Christian Psalms interpretation from the fifth through the twelfth centuries, showing slides of elaborately arranged and illustrated medieval manuscripts. As he demonstrated, the scribes took great pains to arrange and illuminate their manuscripts in ways that delineate the various authorities—from the earliest Church Fathers, the so-called “antiqui,” to the “moderni,” i.e., the medieval exegetes who were developing new methods of analysis. As Mr. Kraebel discussed, the eleventh and twelfth centuries ushered in a new tendency to analyze the literary features of the Psalms employing methods that one would utilize to analyze secular poetry. Although all Christian interpreters agreed that the Psalms were inspired by the Holy Spirit, some exegetes working in the cathedral schools of Rheims and Paris began to explore the intentions and literary designs of their human authors.

In his response to Mr. Kraebel’s lecture, Dean Cohen spoke about the aspects of this new Christian literary approach that shed light on the peshat school of Rashi in nearby Troyes. While accepting the authority of midrashic interpretation implicitly, Rashi and his grandson Rashbam applied literary criteria to devise new peshat readings of Tanakh.

Jonathan Klatt, a current Revel MA Bible student, remarked: “Learning from Andrew Kraebel about how Christian contemporaries interpreted the Bible helped me view Rashi in his broader intellectual milieu and enriched my understanding of his interpretive approach.”

Yael Goldfischer, who earned her Revel MA in Medieval Jewish History in 2004 and is currently pursuing a second Revel MA in Bible (while also teaching Tanakh at Frisch High School, where she serves as Chair of the Bible Department and Director of Israel Guidance), also noted the social aspect of the evening:

It was exciting to learn how Christian commentators approached the biblical text and see how their exegetical approaches compared to their Jewish counterparts. The Latin manuscripts were stunningly beautiful and Mr. Kraebel pointed out how the various layouts convey their meaning. I enjoyed reconnecting with my old professors at the dinner before the lecture. There was a wonderful mix of both current and previous Revel graduate students. As both a current student and a Revel alumna I am proud to be part of the Revel community.

Mr. Kraebel’s day at Revel was an enlightening and enjoyable experience for the community, as well as for Mr. Kraebel himself. Reflecting on his time here, Mr. Kraebel comments:

I’m very glad to have had the opportunity to speak to all of the different Revel audiences. It was such a wonderful time. And I learned a lot—both in preparing those sorts of talks, and, especially, in my conversation with your amazing community of scholars. A true community, indeed, so wonderfully collegial and welcoming.

For a photo essay of Andrew Kraebel’s visit at Revel, click here.