ymposium commemorating the influential contemporary Israeli Bible scholar Amos Hakham, co-sponsored by the Bernard Revel Graduate School and the Yeshiva College Jewish Studies Department, was held on the Wilf Campus this past November 15th. It featured presentations by Professors Shalom Carmy and J. Mitchell Orlian of the YC Bible department, and Revel Professors Mordechai Cohen and Shalom Holtz, with the key note delivered by the final speaker, Professor Noah Hakham of the Hebrew University of Jerusalem. The symposium was conceived and organized by Revel and YC Bible Professor Aaron Koller, who invited the speakers to reflect upon Hakham’s contributions to contemporary Tanakh (Bible) study and reminisce about their personal encounters with this great scholar. The event was well attended by students from Yeshiva College, Stern College and Revel, as well as a number of Revel alumni and YU faculty, including Vice Provost Lawrence Schiffman, who offered the following remarks:

It was a privilege to participate in memorializing a man who contributed so much to the study of Tanakh in Israel and in the wider Jewish community. I knew Amos Hakham from attending conferences in Israel and have known his son, Noah, for many years, so it was especially meaningful to me. It was interesting to see how many YU faculty also had personal connections to Amos Hakham and to hear their analysis of his contribution to biblical studies. Finally, the event showed how important the study of Tanakh is for the religious development of our community.

Amos Hakham is known for his key role in the Da‘at Miqra Bible commentary series published by Mossad HaRav Kook, in which he authored eight volumes, including some of the longest (Psalms) and the most difficult (Job, Isaiah) biblical books. Of the most humble origins, Hakham was catapulted to fame when he won the first International Bible Contest (Chidon ha-Tanakh) in 1958. The publicity generated by the event paved the way for Hakham (previously a clerk at the Institute for the Blind in Jerusalem) to acquire academic training in Bible. That training enabled Hakham to compose his highly acclaimed commentaries, which were the subject of the symposium that evening. 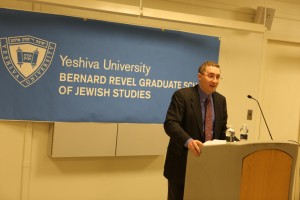 After brief opening remarks by Professor Holtz, who chaired the symposium, Professor Carmy began by mentioning recent seminal Bible scholars who “stand out because the scope and quality of their work makes them exemplary for certain kinds of endeavor.” Rabbi Mordechai Breuer, for example, “initiated a systematic alternative to Bible criticism” in his highly original method of literary biblical analysis. Nechama Leibowitz “set the tone for serious analysis of Tanakh in light of parshanut.” Professor Carmy credited Amos Hakham with the creation of a compelling model for a methodical and thorough “word-by-word, verse-by-verse, chapter-by-chapter commentary.” Despite all of the original research that went into this endeavor, Professor Carmy noted that Hakham did this most unobtrusively—almost as though he were allowing the text to speak for itself. With his passing, we are charged with the task of “pulling the machinery [of his commentary] apart and seeing how he did it—meaning, [how he made] the big decisions about how… major issues, and the minute choices he made with respect to every single word.” Professor Carmy illustrated this phenomenon through the “eved Hashem” (“Servant of the Lord”) chapters in Isaiah (42, 49, 50, 53 inter alia), showing the textual and contextual considerations that led Hakham to identify the “servant” alternatively as the Jewish people and the prophet himself. Then, in Chapter 53, the climactic eved Hashem chapter, Hakham records the various opinions given by earlier scholars regarding the identity of the servant.

Professor Orlian, who heard Amos Hakham’s learned feat at the 1958 Bible Contest, could not attend the symposium personally; but his written remarks were read to the audience by Professor Holtz that evening. (It should be noted that Professor Orlian has served for decades as the Coordinator of the National Bible Contest in the US, and has also been a judge for the International Bible Contest in Israel.) Professor Orlian recalled the suspenseful moments in which Amos Hakham’s life changed. He described vividly how Hakham manifested his command of the entire Bible at the highly publicized Bible Contest. Listening to that charged contest on the radio in 1958, Professor Orlian recounted how the moderator would ask for a source, requiring Amos Hakham to quote a verse. But instead Hakham cited the beginning of the chapter; and when the moderator said he wanted just a specific verse, Hakham responded, “I’m getting there!” and proceeded to recite the entire chapter by heart. 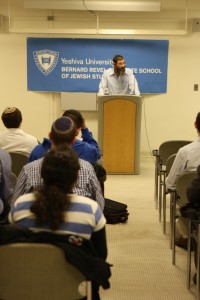 Professor Cohen discussed Hakham’s approach to the Book of Job in the context of the Jewish interpretive tradition. All commentators on this book had to grapple a seeming incongruity: Job, the righteous man who suffered terrible calamities, questions divine justice, whereas his companions defend God by suggesting that Job somehow deserved the punishments that befell him. Yet at the end of the book, God scolds the companions for “not speak[ing] rightly as did my servant Job” (42:7). Maimonides, who regards the book of Job as a narrative that conveys a variety of views regarding divine providence, posits that Job’s initial philosophy was incorrect (as were the simplistic philosophies of his companions), but that he ultimately retracted his erroneous view and was therefore justified by God. Rashbam (who completed Rashi’s Job commentary), on the other hand, adopts the talmudic view that God forgave Job because a man cannot be held accountable for words he said while suffering, whereas the friends were blameworthy for impugning Job’s righteousness—and they should have been more empathetic. As Professor Cohen noted, Hakham takes a third approach: that Job’s seemingly blasphemous words actually reflect unshakable faith in God’s perfect justice, which led him to single-mindedly seek the truth about his suffering, without resorting to simplistic answers, as the friends did. God thus lauds Job’s unswerving commitment to the truth and insistence on making it the foundation of his faith. Hakham cites a talmudic source for this approach (“It is the manner of the completely righteous to come to God forcefully”; BT Berakhot 17b). Yet Professor Cohen suggested that Hakham’s approach reflects the modern outlook that doubt is not incompatible with complete faith. (See Norman Lamm, “Faith and Doubt,” Tradition 9 (1967), pp. 14-51.)

As the culmination of the symposium, Professor Noah Hakham articulated the central features of his father’s distinctive 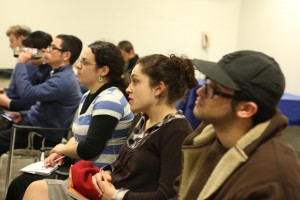 exegetical method. He noted his father’s gift for uniting traditional Jewish commentary with scientific inquiry—as reflected in modern Bible scholarship. In fact, Noah Hakham identified this as the greatest challenge confronting contemporary Orthodox Bible commentators: how to adhere to the doctrines of our Rabbis (Hazal) while remaining faithful to the peshat of the biblical text. He highlighted two essential tenets of his father’s commentary that enabled him to strike this balance. First, although he draws upon rabbinic tradition, especially for halakhic matters, Amos Hakham distinguishes between rabbinic midrashic interpretation and “the plain sense of Scripture” (peshuto shel miqra), which is his primary objective. Second, the peshat of a given verse is determined by the usage of the words both within their immediate context and elsewhere in the Bible. Indeed, the primary focus of his father’s exegesis, said Dr. Hacham, is philological analysis. “Though some might consider this linguistic emphasis excessive,” he added, “that view is unfounded; correct understanding of any given biblical verse is predicated on a correct understanding of its constituent words.” 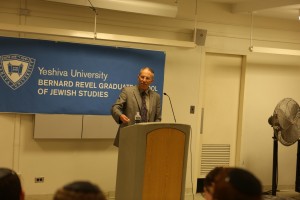 the symposium presentations, members of the audience remained to speak informally with Professor Hakham, who was accompanied by his wife, Noa, herself a scholar of Jewish Art in Late Antiquity. During those discussions, Professor Hakham observed that Yeshiva University was the perfect place to commemorate the legacy of his father, since the school represents a synthesis of academic Bible scholarship and the values of traditional Jewish Tanakh study. It is clear that the audience valued this opportunity as well. Rena Goldstein, who holds a Revel MA in Bible (2012), remarked: “After dedicating much time to studying Amos Hakham’s perush (commentary) on Job, I was excited to learn about the author from men who knew him well. The opportunity to meet people who personally interacted with a commentator on Tanakh is a rarity in our times, and I was both inspired and fascinated by this encounter.” Shlomo Zuckier, a current Revel student, added: “I enjoyed hearing the remarks of these distinguished speakers. . . . It was interesting that [two of them] discussed the notion of ‘the Lord’s servant’—in Isaiah and Job. [This] moniker [actually] describes… Amos Hakham, who committed his life to the study and explication of the Bible, the word of God. We would all do well to emulate this careful scholar, this painstaking eved Hashem.”

This article was written by Rivka Jacob (Revel MA, 2012)