The first International Bible Contest for Adults in thirty-two years took place at the International Convention Center in Jerusalem on December 12, 2012. Prime Minister Benjamin Netanyahu and Education Minister Gideon Sa’ar opened the event by lighting Hanukkah candles. Twenty-seven experts on the Hebrew Bible from around the world gathered in Jerusalem for the week of Hanukkah to participate in the contest. A written test two days earlier selected sixteen of them to appear in the televised event on December 12.

Refael Meyuchas of Israel—a computer programmer for the IDF—won first place with a perfect score. Second place was won by Rabbi Ezra Frazer, who is currently pursuing a PhD in Bible at Revel and serves as an Instructor of Hebrew at Yeshiva College. The YC Hebrew Program arranged to stream the contest over the internet, so that Frazer’s students and colleagues could watch and cheer from the YU campus. 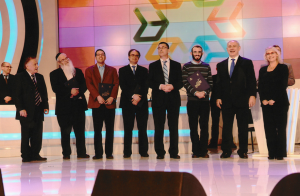 Frazer commented on his time in Israel: “The entire week was unbelievable. They took us to visit excavations in the City of David that arestill closed to the public, where we got to see discoveries from the First and Second Temple Periods. In addition, the week was a tremendous opportunity to meet Jews from all over the world and to learn about their diverse communities. And, of course, it was an incredible experience to see thousands of people—including the Prime Minister—fill a convention center to watch a contest that focuses on mastering the Bible.”

Interviews with Frazer and other contestants are available online in Hebrew and English.