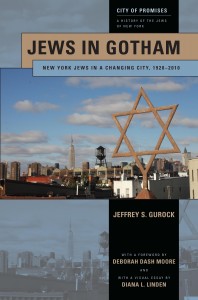 The Jewish Book Council has named City of Promises: A History of the Jews of New York (NYU Press, September 2012) recipient of The Everett Family Foundation Jewish Book of the Year Award.

The three-volume work—with contributions from Jeffrey S. Gurock, Libby M. Klaperman Professor of Jewish History at Yeshiva University, as well as Howard B. Rock, Annie Polland and Daniel Soyer—explores the relationship Jews have had with New York City and how they have been a visible and integral part of the city’s culture, economy and politics, beginning with the first Jews to arrive to New Amsterdam in 1654, and moving through history to present day.

Gurock’s volume, Jews in Gotham: New York Jews in a Changing City, 1920-2010, is the third in the series and focuses on neighborhoods, exploring Jewish life within the streets of the metropolis and showcasing the reasons for New York’s continued preeminence as the capital of American Jews.

“I am gratified by this recognition of my work and the collaborative efforts that made City of Promises a joy to write,” said Gurock. “I am also grateful for the opportunity our University has provided me to teach my students and write my books in an atmosphere that values Jewish studies. This is not the first time a YU academic has been so honored and will not be the last.”

The winners of the 2012 National Jewish Book Awards will be honored on March 14, 2013 at a gala awards ceremony at the Center for Jewish History in Manhattan.

Gurock discussed his award-winning book in a September interview with YU News.

The author or editor of 15 books, Gurock’s A Modern Heretic and a Traditional Community: Mordecai M. Kaplan, Orthodoxy, and American Judaism (Columbia University Press, 1997) was awarded the Saul Viener Prize from the American Jewish Historical Society in 1998. His Orthodox Jews in America (Indiana University Press, 2009) was a finalist for the National Jewish Book Award in the area of American Jewish Studies.