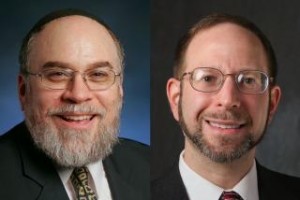 Dr. Mordechai Cohen, associate dean and professor of bible at Yeshiva University’s Bernard Revel Graduate School of Jewish Studies, and Dr. Ephraim Kanarfogel, E. Billi Ivry Professor of Jewish History at Revel, are participating, as adjunct fellows, in a research group at the Herbert D. Katz Center for Advanced Judaic Studies at the University of Pennsylvania that spans the 2012-13 academic year.

Cohen and Kanarfogel join a group of approximately two dozen leading scholars of Jewish, Christian and Islamic social and intellectual history from universities around the world to conduct research on this year’s theme, “Institutionalization, Innovation and Conflict in 13th Century Judaism,” and develop a more fully-integrated account of Europe and the Mediterranean basin in the 13th century.

“The appointment of Professors Kanarfogel and Cohen as adjunct fellows is testimony to their stellar scholarly reputations and it also facilitates interaction between Revel faculty and other scholars doing advanced research in diverse fields of Jewish studies,” said Dr. David Berger, Ruth and I. Lewis Gordon Professor of Jewish History and dean of Revel.

“This informative and stimulating academic forum brings me into direct contact with key scholars engaged in cutting-edge research on Jewish intellectual and social history in the medieval period,” said Cohen, who was a fellow at the Center in spring 2002 as part of a group that focused on the theme of “Biblical Exegesis in a Comparative Context: Jewish, Christian, Islamic”—his personal area of expertise.

While Cohen felt that the earlier experience enriched his scholarship through exposure to leading trends in the study of Bible interpretation, he added that in some ways this year’s topic is of even greater value to his work: “It further widens my intellectual horizons by providing access to the larger cultural contexts within which our great Bible commentators worked.”

Kanarfogel, who has also served as a fellow at the Center in the past, agreed. “My association with the Center over the

years has impacted my research and publications in very positive and substantive ways, and I remain grateful to my colleagues there for their interest and support,” he said. “It is doubly gratifying to have Revel colleagues participating in the deliberations and conferences at the Center. These interactions further support the academic visibility of Revel and reinforce its position as a leading doctoral program in Jewish studies in the United States with highly accomplished and well-known faculty.”

Cohen and Kanarfogel will present to the group in a joint session on April 24. Kanarfogel will discuss the use of Maimonides’ Mishneh Torah in 13th-century Ashkenaz and Cohen will focus on Nahmanides’ four senses of scriptural signification. Earlier this year, Kanarfogel and Berger presented at another conference hosted by the Center, whose theme discussed Jewish and Christian presence in 13th century Paris and Barcelona.

This article was written by Perel Hecht