Leading Scholar of Polish and Lithuanian Jewry Speaks at Revel 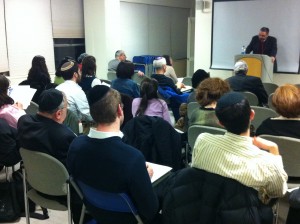 Two conventionally held historical beliefs were challenged by Professor Adam Teller in his recent presentations as a Visiting Scholar at Revel on Wednesday, February 27: (1) that Polish-Lithuanian Jews lived in social isolation from their Christian neighbors; and (2) that the printing press was, in and of itself, an engine of radical social and intellectual change.

Professor Teller joined Revel students, faculty and alumni for dinner, during which he spoke informally about his academic trajectory. He described how his life experiences as an outsider—as a Jew at Oxford, an Englishman in Israel, and an Israeli-trained scholar in America—contributed to his intellectual career and scholarship. Anecdotally, he emphasized the role that close examination of non-Jewish sources has played in his understanding of Polish Jewry. Through a careful reading of numerous economic and legal archival documents in Polish and other languages (to which he gained unique access by actually working in various cities in Poland), Professor Teller discovered that Polish Jewry was in fact well integrated with non-Jewish society, playing a large role in royal commerce and heavily utilizing the Polish court system. This informal presentation was followed by a lively discussion of historical methodology prompted by questions from Revel students and alumni. 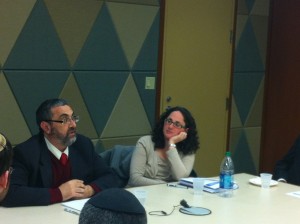 Rabbinate and the Book in the Sixteenth and Seventeenth Centuries.” This lecture presented an ironic pairing of historical developments: whereas the real political power of Polish-Lithuanian rabbis declined during this era, the prestige of the rabbinate actually rose, with the community showing them greater ceremonial respect. In this context, Professor Teller explained the role played by the printing press in Polish-Lithuanian Jewish society. While the conventional wisdom regards the availability of print to have served to democratize and disseminate knowledge, Professor Teller argued that, in fact, book printing in early-modern Poland and Lithuania was targeted at an already educated, affluent, and often rabbinic, elite. In other words, book printing is not an independent factor of historical change, but rather works in tandem with other social and intellectual processes, in this case giving more knowledge and prestige to those who already possessed them for other reasons. As proof for his claim, Professor Teller cited the formatting of the books printed during this era, which were difficult to read and included no illustrations. Sometimes, in fact, works originally intended for a popular audience were reformatted by printers in a way that made them suitable primarily for scholars. As an example, Professor Teller cited the case of the Shulhan Arukh, the four-part code of Jewish law penned by the sixteenth-century Safed Rabbi Joseph Karo. This work was originally composed as a brief exposition of Jewish law and was accordingly first published in a pocket-size version accessible to anyone who could read Hebrew. That format was eventually abandoned, however, as publishers in the seventeenth century increasingly printed the Shulhan Arukh within an extensive apparatus of complex scholarly commentaries in large tomes suited primarily for study by advanced rabbinic scholars.

Co-sponsored by the Yeshiva College Jewish Studies Colloquium, Professor Teller’s lecture drew a large crowd of YC and Stern College students and faculty, who joined the Revel audience that had attended the dinner and remained for the 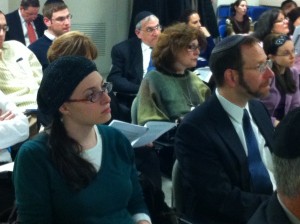 lecture. Among the participants in the program that evening were YU Vice Provost Lawrence Schiffman, Revel Dean David Berger, and Associate Dean Mordechai Cohen, as well as Revel Jewish History Professors Elisheva Carlebach and Debra Kaplan. It was, in fact, Professor Kaplan who had invited Professor Teller, and she introduced him and his work at both his dinner presentation and lecture. Professor Kaplan is teaching a Revel course this semester on Print Culture in the Jewish World, and her students found this special program to be a lively and illuminating supplement to their usual weekly preparations and lectures.