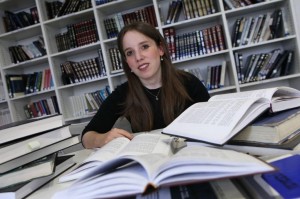 At Revel, you earned both a master’s and doctoral degree. What fascinates you about Judaic studies?

An Orthodox upbringing and education had given me a firm religious foundation, but I sought to explore and substantiate my convictions and observance through the study of philosophy. Medieval Jewish philosophers discussed many important theological and philosophical concepts that are still debated today. I feel that my self-understanding as a Jew has been enhanced through my studies and my beliefs and practice have become far more meaningful.

I valued the opportunity to learn from serious academics that shared my religious commitments, served as mentors and influenced my intellectual development. I’ve gained a lot from informal conversations that I had with my professors as I developed my theological perspective. The candor and sophistication with which they discussed ideas with me impacted me greatly. Dr. David Shatz, Dr. Arthur Hyman and Dr. Zev Harvey, a Hebrew University professor who taught a summer course at Revel and later became an adviser for my dissertation, are all paradigmatic religious scholars that I emulate.

What does your doctoral work focus on?

I studied the philosophical interpretation of free choice in the exegetical part of Joseph Albo’s work Sefer ha-Iqqarim, or The Book of Principles. There’s a general scholarly consensus that even though Albo was influential and popular, he wasn’t very innovative as a philosopher, and there’s been a recent trend in Jewish philosophy which argues that there may have been more philosophical depth to his work than he’s given credit for.

I furthered that argument by exploring Albo’s notion of free choice, which is a theme that he repeatedly discusses in his interpretation of challenging biblical narratives. In a number of these instances, Albo interprets such narratives that have been traditionally understood as denying free choice as affirming free choice instead, perhaps in an effort to encourage his generation to assert their own free will and maintain their religious identities despite the persecutions of late 15th-century Spain, which would eventually lead to the expulsion of the Jews.

While earning your degrees at Revel, you also taught courses in Jewish Philosophy and Bible at YU’s Stern College for Women and served as assistant principal at the Frisch School as well. What do you like about teaching?

It’s a funny story, because this was not what I expected to do back in college. I graduated from Stern with a degree in economics, worked at a hedge fund and planned to go into finance. I thought I’d eventually move into venture capital. I loved Judaic studies and had actually transferred to Stern from University of Pennsylvania for them, but not as a career move—just so I could study Jewish topics for my own enrichment.

After my time at the hedge fund, the enormous time and travel commitments of the investment banking and consulting world didn’t appeal to me, so I thought I would explore opportunities in hinukh [education] to see if I found that fulfilling. And I have. I began teaching at Frisch and a few years later I was teaching at Stern as well.

At Stern, a sampling of the courses I’ve taught includes Philosophical Issues of Tanakh, where we take challenging biblical narratives and interpret them philosophically; more modern topics like the Philosophy of the Rav, where we discuss many of Rabbi Joseph B. Soloveitchik’s works, their influences, both Christian and Jewish, and their impact on our own understanding of religion in contemporary times; and a class called Dogma, where we investigate whether there are obligatory beliefs in Judaism and the delineation of such beliefs throughout Jewish history. In my classes, we analyze the great ideas of philosophy. Topics include free choice, divine command morality, reason and Revelation, and theodicy.

I like to explore my students’ questions and help them think about their religious experience in much greater depth. I often begin my classes with very general and relevant philosophical questions to elicit initial feedback. For example—if God is all-knowing, how can man have free choice? Does God dictate morality, or is there an independent standard of ethics? How can a good God allow evil? Are Jews obligated only in halakhic practice or in beliefs as well? We then analyze primary sources from medieval Jewish philosophers and secondary sources from contemporary scholars which help students develop a more sophisticated understanding and, hopefully, more meaningful convictions.

I presented a paper at the Annual Conference of the Association for Judaic Studies in December based on one of the chapters of my dissertation and a university press in attendance expressed an interest in my work. I’ve since submitted my manuscript for publication. This summer, I’ll be participating in an academic workshop for recent PhDs and a conference on the philosophy of Scripture at the Shalem Center’s Institute for Advanced Studies in Jerusalem.