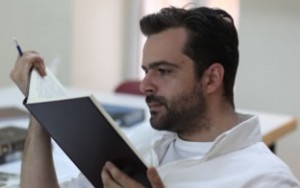 Born in Zagreb in 1980, Vukan Marinkovic was already quite accomplished before joining Revel, where he is currently studying toward his PhD in modern Jewish philosophy. Having found his Jewish roots in his native Croatia, Vukan earned a double MA in Philosophy and Religious Studies from Družba Isusova, a Jesuit school, writing his thesis on Maimonides’ thirteen principles of faith. He went on to deepen his knowledge of classical Jewish texts at the Paideia Institute in Stockholm and at the Maayanot Institute in Jerusalem. In Croatia he went on to play a key role in fortifying and advancing Jewish culture and education as a Lecturer in Jewish Thought at the University of Zagreb. At the same time, Vukan—who is a music and cinema connoisseur—worked at the production company Artim Produkcija as a creative director and event manager, establishing the first summer eco music festival in Croatia—“Terraneo”—in 2011. Yet Vukan was determined to further expand the range of his scholarship to the level that could be achieved only in a top tier academic Jewish studies program. He had forged ties with a number of Israeli scholars and was accepted at more than one graduate program in Israel; but he chose instead to attend Revel, since he identifies with its unique Torah U-Madda mission that integrates academic and traditional study of Jewish texts and concepts. Though modern Jewish philosophy is his focus, Vukan also has a profound interest in classical and medieval Jewish history and thought, which he regards as critical for a genuine understanding of the philosophical meaning of Judaism in its encounters with modernity worldwide. He finds the Revel program—which offers an array of courses in all of these areas—to be stimulating and fulfilling. His Revel professors, for their part, are deeply impressed by Vukan’s profound and broad understanding of Jewish and general scholarship, and are inspired by his avid eagerness to expand his horizons further.