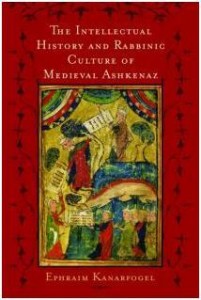 Dr. Ephraim Kanarfogel, E. Billi Ivry Professor of Jewish History at Yeshiva University, has won the 2013 Goren-Goldstein book award from the Center for Jewish Thought at Ben-Gurion University for his recent publication The Intellectual History and Rabbinic Culture of Medieval Ashkenaz, which was published by Wayne State University Press in December 2012.

Dr. David Berger, Ruth & I. Lewis Gordon Professor of Jewish History and Dean of The Bernard Revel Graduate School of Jewish Studies stated: “The Goren-Goldstein book award in Jewish Thought is almost certainly the most prestigious award in the field. It is given only once every three years to books published during that three-year period in either Hebrew or English, and there were more than eighty submissions for this year’s award.

Its substantial monetary component assures the submission of virtually every excellent work. Professor Kanarfogel’s receipt of the award is testimony to the enthusiasm that his ambitious study evoked in a committee of three outstanding experts in Jewish Thought.” Professor Gerald Blidstein of Ben-Gurion University, the head of the international committee of judges, noted that “Ephraim Kanarfogel’s The Intellectual History and Rabbinic Culture of Medieval Ashkenaz is an unusual, exceptionally thorough and learned treatment of Tosafist intellectual activity, laying down the claim that the Tosafists are not to be read as legists or even as Talmudists alone but are rather best appreciated with a view to their broader intellectual activity—as Biblical exegetes and even as philosophers. Kanarfogel’s work, which provides a new perspective on Tosafist creativity, will become a standard reference in the field.”

This article was written by Rivka Skaist (Revel 2014)