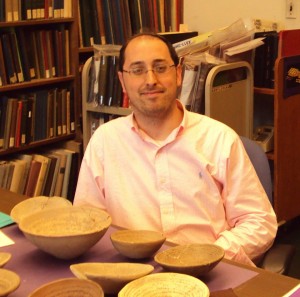 Dr. Shai Secunda earned his PhD in Talmud at Revel in 2008, completing his dissertation entitled “Dashtana—Ke-Derekh Nashim Li: A Study of the Babylonian Rabbinic Laws of Menstruation in Relation to Corresponding Zoroastrian Texts.” He went on to engage in research as a Mandel postdoctoral Fellow at the Scholion Institute of the Hebrew University of Jerusalem from 2009-2012, and he is currently a Martin Buber Research Fellow at the Hebrew University. “My studies at Revel,” he says, “positioned me for a career in academic Jewish studies at the top research institutions in the world.” Dr. Secunda’s first book, entitled The Iranian Talmud—on the interface between the Babylonian Talmud and the surrounding Persian intellectual culture—will be published by University of Pennsylvania Press in late 2013. Dr. Secunda also edits the web-based Talmud blog www.thetalmudblog.wordpress.com, which brings critical discussions about the Talmud from a variety of perspectives to a broad audience.

Dr. Secunda’s dissertation focuses on the Talmud Bavli’s Iranian context, particularly the development of a number of aspects of hilkhot niddah in comparison with similar trends in Zoroastrian literature. Zoroastrianism—the religion closely aligned with the ruling Persian dynasty and practiced by most of the Persians living in greater Iran in the talmudic era—has many discussions about the laws of purity, so there was plenty of parallel material with which to work. On the rabbinic side, hilkhot niddah is the one area of the Jewish purity laws that remained in practice even following the destruction of the Second Temple. In general, it is a hot topic in contemporary Jewish discourse, as it relates to larger important issues of gender in Jewish law and culture.

Dr. Secunda initially came to Revel to work with Professor Yaakov Elman on questions relating to the textual relationship between the Tosefta and parallel tannaitic texts submerged in the Bavli and Yerushalmi—the subject of Professor Elman’s own dissertation and subsequent published work. Around the time that Shai entered Revel, Professor Elman was in the midst of studying Middle Persian, Zoroastrianism, Sasanian history, and other aspects of the Talmud’s Iranian context. Professor Elman invited Shai along for the intellectual journey. Once he began, Shai “never looked back”.

Dr. Secunda refers to Professor Elman as his “Doktorvater,” and the intellectual luminary who shaped his Revel experience. He has “never met a person more devoted to both the pursuit of scholarship and to the training of students.” As he states with gratitude: “I cherished the opportunity to be properly trained as a scholar by Professor Elman.” Dr. Secunda also notes that he gained a great deal in terms of scholarly method and precision from two courses he took with the renowned scholar and pedagogue Professor Haym Soloveitchik.

For Dr. Secunda, studying at Revel was “an incredible experience.” He came to Revel after spending a number of years studying in a traditional (“haredi”) yeshiva and was pleased to find at the graduate school a passion for learning—among his peers and the faculty—that was equal to the excitement he had experienced when studying Talmud during his yeshiva days. Moreover, he was gratified to be able to work in an intellectually open environment with extremely dedicated professors. When asked what advice he can give to current Revel students, Dr. Secunda encourages them to “take advantage of Revel’s top-rate professors and the learning environment, which, while academic, still has the passion of a traditional beit midrash!”