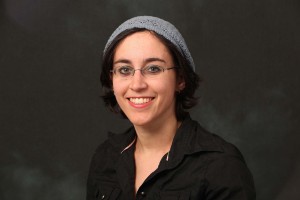 This past fall Meira Wolkenfeld (nee Rubin) began studying toward her PhD in Talmud at Revel.  Originally from Sacramento, Meira relocated to New York as a student at Yeshiva University’s Graduate Program for Women in Advanced Talmudic Studies at Stern College (GPATS) where she intended to further her “personal goal of becoming a better Gemara learner.”  While studying at GPATS, she took a Revel course with Professor Yaakov Elman and realized that “I could have a better understanding of what the Talmud was saying by considering its cultural context.” She likes “knowing that the Rabbis of the Talmud were real people, and the stories about their everyday habits.” At Revel, Meira further pursues this area of inquiry: when studying the Talmud she is particularly interested in its social history and cultural context. And so she asks questions like: Who are the people who wrote the Talmud? What were their everyday lives like? How do their opinions reflect their world?

Professor Elman, who originally drew Meira to Revel’s program, remains one of her favorite teachers. While Meira certainly gains much from the material covered in his classes she also “really enjoys seeing the enthusiasm and joy that he has for his work.” Meira also feels that she gained a great deal from Professor Debra Kaplan’s historical methodology course, as it helped her “approach [her] talmudic material from all sorts of different angles” and taught her that “being conscious of the historiographical positions of the scholars [she] read[s]” is of tantamount importance. She likewise gets a great deal of satisfaction from the second semester of Dr. Moazami’s Middle Persian course. As she remarks: “I am enjoying learning to read a totally wacky script (which has surprisingly little to do with the sounds it represents) and read texts which give me a glimpse into a culture I previously knew nothing about, which made its mark on the Talmud Bavli.”

At Revel, Meira feels that she is not only a student, but also part of a community of scholarship.    Her biggest community building experience was Dr. Kaplan’s historical methodology class, where she met doctoral students in other disciplines and got to hear about their work. Meira is also “a big fan of the fifth floor Revel library community.” She explains: “I love walking onto the fifth floor and knowing I’ll see Jesse in his spot, and Aryeh in his etc.”

Before attending Revel, Meira earned her Bachelor of Arts from UCLA, summa caum laude, Phi Beta Kappa, in Ancient Near Eastern Languages and Cultures with a specialization in archeology and spent a summer on an archeological dig in Jaffa.  Meira complemented these studies with minors in Jewish studies and German language, which led her to spend an immersion semester abroad at Humboldt University in Berlin.  Prior to UCLA, Meira studied at Midreshet Lindenbaum.

When asked what motivated her to enroll in Revel, Meira explained that she started the M.A. while in GPATS, which has a dual program with Revel. She first decided to study Bible at Revel because she had focused on Ancient Near Eastern studies in college and thought she might want to continue in that field.  She also took a course in Talmud with Dr. Elman as she had read some of his work and heard him speak at a conference at UCLA. In her words, she “couldn’t pass up the opportunity to take his class. It definitely proved worthwhile!” After taking his class, Meira decided to continue studying Talmud with Dr. Elman at Revel. “Revel” says Meira is, as far as she knows, “the only university on the east coast which offers Middle Persian. I wanted to study the Middle Persian, Zoroastrian context of the Bavli and this is certainly the place to do that.”

Meira is well on her way with the coursework toward her PhD.  “Right now,” she explains, “the big decision is what language to learn next, French, Syriac, or take an Aramaic class?” Meira also has hobbies beyond Talmudic study. As Meira notes, she spends “way too much time looking for vintage dresses in thrift stores.” She also loves drawing and painting.