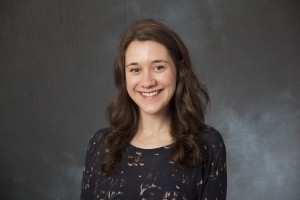 Though Ariella Polakoff is new to Revel, her face will soon become a familiar one to Revel students and faculty. Ariella will serve as one of the Revel Student Liaisons beginning this fall, sharing her warm smile at the welcome desk in the new Revel Dean’s Suite.

Ariella realized how much she loves learning about history while pursuing her undergraduate degree at Stern College.  She majored in history, focusing on both ancient civilizations and modern history.  While at Stern, she was privileged to hear a guest lecture by Revel professor Debra Kaplan, who soon became a role model for Ariella.

At Revel, Ariella is looking forward to increasing her knowledge of Jewish history in the medieval period.  She half-jokingly says that her entire schedule was built around being able to take Professor Ephraim Kanarfogel’s course on the Rishonim. In her undergraduate studies, Ariella did not focus on the middle ages. But at Revel she intends to engage in the medieval interface between religious and secular history that fascinates her. She is especially interested in exploring how religious sensibilities played out in social, economic, and cultural movements throughout medieval Jewish history. Ariella feels that Revel is the perfect place to navigate the tension between secular and religious perspectives in her chosen field, guided by teachers who are expert scholars and also manifest respect for Jewish tradition.

Apart from the time she devotes to her studies, Ariella has an opportunity to pair her passion for history with her creative side by being involved in museum curating.  She currently interns at the Center for Jewish History in the City and hopes to pursue other museum internships to advance that ambition in the future.  Ariella’s unique style is further evident by her employ at the artistic clothing and home store Anthropologie.

If all of this is not enough to keep her busy, Ariella spends many Shabbatot taking care of residents at Ohel Bais Ezra’s supervised living facilities.  She is a renaissance woman perfectly suited to studying medieval history.

This article was written by Ahuva Gold, Revel MA student in Bible