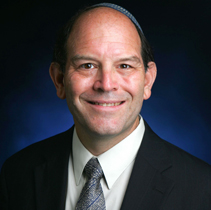 Revel Professor Steven Fine and his undergraduate Ancient Jewish History class featured in The Jewish Week this past Tuesday, after an exciting semester of tombstone deciphering and cross-country friendship. An article by Fine, “Tales From Tombstones,” caught the eye of Californian Pastor Carl Morgan, also curator of the Woodland Museum of Biblical Archaeology. Morgan possessed one of the Aramaic tombstones about which Fine had written, and sent Fine a photograph of the artifact. Fine’s students decided to decipher the 5th-century tombstone over the course of the semester, all the while in touch with Morgan to glean more information about the artifact’s appearance and dimensions. In the end, Morgan generously chose to donate the tombstone to the Yeshiva University Museum, believing that the non-biblical tombstone of “Sa’adah, daughter of Pi[nchas]” belonged in a Jewish institution.