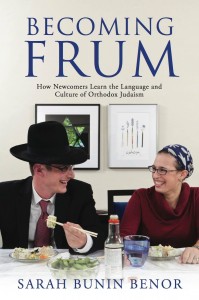 (This article by Yaffi Spodek originally appeared on YUNews and is republished here courtesy of YU Communications.)

Dr. Sarah Benor, an expert on the social science of American Jews, discussed several key concepts from her book, Becoming Frum: How Newcomers Learn the Language and Culture of Orthodox Judaism (Rutgers University Press, 2012), at an October 15 lecture on YU’s Wilf Campus. The talk was presented by Yeshiva College’s Department of Jewish Studies and the Bernard Revel Graduate School of Jewish Studies.

Based on her research studying the members of a Jewish community in Philadelphia for a year, Benor explored their distinctive culture and language and explained how ba’alei teshuva [newly religious] acquire those speech patterns as part of the process of joining the Orthodox community.

“Language has a unique ubiquity, in that you need to make decisions all the time about how you will speak and you can’t avoid using certain words,” said Benor, associate professor of contemporary Jewish studies at the Hebrew Union College-Jewish Institute of Religion.

She found that ba’alei teshuva either practice hyper accommodation—picking up communal norms to an extreme, such as in manner of dress or excessive use of Hebrew words—or deliberate distinctiveness in taking on cultural practice and language but with unique combinations, such as wearing a black hat with trendy sunglasses or using Hebrew words combined with American slang.

Benor also described the “bungee effect” to trace the progression of ba’alei teshuva who often start out at one extreme in their level of observance and gradually bounce back to a happy medium.

Dalia Shulman, a student at Revel studying medieval Jewish history, found that the lecture gave her a new perspective on her own work. “It was really fascinating to hear a sociological lecture about the Jewish community, and made me wonder about how I’m viewing documents of medieval Jewish history and making my own interpretations.”

For Ari Adler, a junior at Yeshiva College, it “was really interesting to hear about her findings, especially because I am interested in studying linguistics in graduate school,” he said.