A Closer Look at Nehama Leibowitz 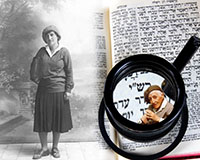 The Bernard Revel Graduate School of Jewish Studies held its inaugural event of the fall semester’s special lecture series, “Nehama Leibowitz and Tanakh Study: Yesterday and Today,” at Yeshiva University’s Wilf Campus on October 22. The event, which was attended by more than 200 people, included personal recollections of Leibowitz by one of her earliest pupils, Esther Manischewitz, as well as an academic lecture about Leibowitz’s Bible scholarship by Revel Associate Dean and Professor of Bible, Dr. Mordechai Z. Cohen.

“Nehama Leibowitz, the master teacher, has become a larger than life figure, a sort of celebrity,” said Cohen. “Yet Nehama regarded herself as a simple teacher, who sought to guide others in their study of Tanakh [Bible].”

In 1930, at the age of 25, Leibowitz (1905-1997) earned a doctorate in Bible from the University of Marburg, Germany, and subsequently immigrated with her husband to Jerusalem. Over the next 67 years, she became one of the world’s most esteemed Bible scholars, winning the Israel Prize for education in 1956. At the beginning of her career, from 1930 until 1950, Leibowitz taught at Jerusalem’s Mizrachi Women’s Teachers Seminary. One of her students there was Esther Manischewitz (née Ostrovsky), also Leibowitz’s neighbor at the time, who entered the Seminary in 1938.

“I wasn’t afraid of her, but a lot of people were,” said Manischewitz in a video presentation about her experiences in 1930s Jerusalem. “She was tough—but also very kind, and very nice. She was an excellent teacher.” Manischewitz immigrated to the United States in 1951 when she married her American husband, Bill. Together, they helped found Teaneck’s first Orthodox synagogue, Congregation Bnai Yeshurun. 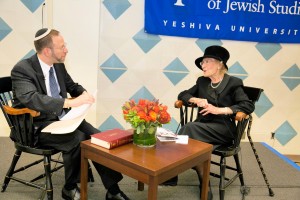 In the 1980s, while pursing his doctorate in Bible from Revel, Cohen too had the opportunity to learn from Leibowitz. Cohen noted in his lecture, “Nehama Leibowitz’s Lasting Impact on Bible Scholarship,” that the traditionally Orthodox Leibowitz rejected the scholarly method of “source criticism” that contested the Bible’s divine origins (though she had no problem with quoting non-Orthodox Bible scholars). She also rejected the “historical” school’s assertion that there can only be one legitimate explanation of the biblical text.

Instead, Leibowitz preferred to apply to the Bible the literary method analysis known as “New Criticism,” following the lead of German Jewish scholars such as Franz Rosensweig and Martin Buber, as well as his student Ludwig Strauss. “Nehama Leibowitz, following the tenets of new criticism, makes a fundamental distinction between literature and history,” said Cohen. “She therefore argued that the text alone— and not the history behind it—determines what is the correct interpretation. Hence, if the text is open to multiple interpretations, they are all valid.”

Cohen provided an example of this interpretive pluralism. In Genesis 32:7, Jacob is told by his messengers, “We came to your brother, to Esau.” This description can imply that Esau has true brotherly affection for Jacob, or alternatively indicate that Esau is the same brother Jacob remembers from years past—the one that wanted, and still wants, to kill him. Both readings, the former belonging to Rashbam (Rabbi Samuel ben Meir, c. 1085-c.1158) and the latter to Rashi (Rabbi Shlomo Yitzchaki, 1040-1105), are valid.

Additionally, said Cohen, Leibowitz stressed the Talmud’s observation that the Bible is written in “the language of man.” For example, God’s question to Adam (“Where are you?”) in the Garden of Eden does not indicate God’s lack of knowledge, but rather serves to start a conversation with His human creation.

“I thought the event was fabulous,” said David Moster ’07YC,’9A, ’10BR, a doctoral student of Bible and Ancient Near Eastern History at New York University. “Mrs. Manischewitz’s oral history was the perfect complement to Dr. Cohen’s fantastic lecture about Nehama Leibowitz’s scholarship and its intellectual context.”

The event was sponsored by the Dr. Monique and Mordecai D. Katz Endowed Lecture Fund.