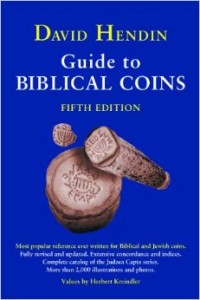 On December 16, Dr. Lawrence Schiffman’s Revel class on “The Bar Kokhba Revolt & the Judean Desert Documents” was treated to a guest lecture by David Hendin, a curator at the American Numismatic Society and an expert in ancient Jewish and biblical coins. Hendin is the author of Guide to Biblical Coins, now in its fifth edition, as well as many other books and articles on the subject. The lecture was open to the public.

Hendin explained that coins are an oft-neglected primary source that can teach us a lot about the past. In the case of Bar Kokhba, they are relevant with regard to determining the geographical extent of the war, due to where they have been found, and illuminating Bar Kokhba’s ideology.

Bar Kokhba did not need to mint coins; he did so merely for the promotional benefit. Every Bar Kokhba coin was struck on top of a preexisting coin and so they had a negative fiduciary value, the value of the preexisting coin plus the cost of the stamping process. Hendin stressed that this was done for solely practical reasons: Bar Kokhba did not inherit an infrastructure and so minted his coins the way he could. It was worthwhile for him due to the widespread use of coins, “the ancient mass media.”

Hendin explained that temple imagery was used on the coins to harken back to a glorious past. He spoke about the different images and texts and what they represent. Even after the war, people connected to their symbolism, poking holes in the coins to wear them as amulets when they were no longer considered currency.

As Hendin demonstrated the importance of coins for understanding the past, we look forward to calling upon his expertise again in the future!

This article was written by Meira Wolkenfeld, a doctoral student of Talmudic Studies at Revel.