Review of Shai Secunda’s “The Iranian Talmud: Reading the Bavli in Its Sasanian Context” Exploring Esther: The Origins, Values and Power of Purim 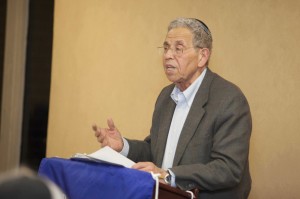 Maori, whose expertise is in ancient and medieval Jewish Bible exegesis with a focus on Rashi  (Rabbi Shlomo Yitzchaki, 1040-1105) and Abraham Ibn Ezra (1089-c.1167), delivered a lecture titled, “How did Rashi Balance Peshat and Derash? Rabbi Abraham Bakrat’s Answer.” The presentation discussed the super-commentary of this late fifteenth-century Spanish scholar and how it illuminates Rashi’s methodology.

To contextualize Maori’s lecture, Cohen’s introduction raised a question that has troubled scholars for centuries: how much of Rashi’s commentary is really peshat?  To emphasize this question, 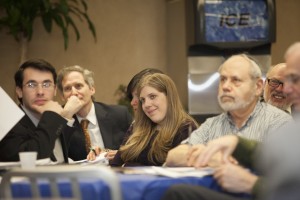 Cohen cited Ibn Ezra’s statement that only one in a thousand of Rashi’s comments on the Bible are peshat. Though most scholars see this as an exaggeration, there have been many attempts over the centuries to try to answer this question and gain a deeper understanding of Rashi’s valuation of peshat. As Maori noted, the twentieth-century Bible scholar Nehama Leibowitz insisted that Rashi was a “parshan and not a darshan” who utilized midrashim to resolve difficulties in the peshat of the text.

Maori contrasted Leibowitz’s approach with that of Bakrat in Sefer Zikaron, his super-commentary on Rashi, penned in 1516. As Maori noted, Bakrat maintains that Rashi cited midrashim because he valued midrashic interpretations in their own right, not because of a perceived difficulty in the peshat. In other words, Rashi cited midrashic interpretations because he believed that both the midrash and peshat understandings are “words of the Living God.” And so, Rashi was aware of the peshat but also invoked midrashic interpretations that offer religiously meaningful insights. Maori also highlighted the opinion of Bakrat that when Rashi writes “I have come to give only the peshat of the verse” he actually means to say that in this particular instance he will limit himself to peshat—but not that this is his categorical principle. 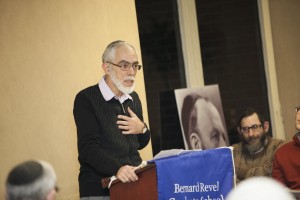 As noted by Cohen in his introduction, the best known feature of the Malbim’s commentary is his denial of synonyms in the Bible. In contrast to the many medieval commentators who avoid reading into repeated ideas in Scripture, the Malbim famously denies the notion of synonymous parallelism and instead seeks to distinguish between seemingly identical expressions of a given idea.

Frisch’s lecture delved beyond this well-known characteristic of Malbim’s biblical commentary and discussed how other, more central characteristics of his methodology relate to his larger personal and scholarly perspectives. What emerged was an intriguing picture of a complex nineteenth-century rabbinic figure who is faithful to, yet critical of, rabbinic interpretation, and who seeks binary oppositions in the biblical text, delves into the psychological motivations of its characters, and aims to demonstrate its literary coherence. Frisch described the Malbim as a “conservative revolutionary” who embraced the contentious and critical points that were circulating amongst the Reformers of the Enlightenment era to enhance his thoughts on Scripture, but did so with cautious discretion so as not to compromise his own more traditional convictions.

In his response to the two presentations, Cohen noted that although we often think of biblical commentators as working alone in a room isolated from the outside world, “all of us perceive the Torah and earlier interpretive tradition within the realities of the world we inhabit.” Malbim, living in central Europe during the nineteenth century, would have been a different commentator had he lived in eleventh–century France, as Rashi did.

“We like to think of peshat as the highest form of interpretation,” continued Cohen, “but in Rashi’s medieval

Ashkenazi intellectual milieu it was not necessarily perceived as such.”  Though some scholars, like Leibowitz, have tried to show how Rashi used midrashic interpretations to arrive at the peshat, it might be more accurate to assume that he cited the midrashic interpretations for their inherent value—as Bakrat argued. “Parshanut ha-Miqra is not only about interpreting the words of the Bible; it is about finding meaning in them,” concluded Cohen.

The symposium marked the first event in Revel’s Winter Lecture series, and was generously sponsored by Dr. Monique and Mordecai D. Katz.

This article was written by Aliza Storchan, a Revel MA student in Bible