An icy snowstorm did not deter over 40 students, faculty and community members from gathering in Belfer Hall on February 3 to hear Dr. Isaiah Gafni, Sol Rosenbloom Professor of Jewish History at the Hebrew University of Jerusalem, present a lecture on images of the Talmudic sages in modern times.

While Gafni is most noted for his extensive writing on social, religious and cultural history of the Jews in late antiquity, his lecture, “Will the “Real” Rabbis Please Stand Up? On the Repackaging of the Rabbinic Model in Modern Historiography,” focused on the historiography of his field over the past 200 years.

Gafni argued that the perception of Talmudic figures has undergone “constant reshaping” from generation to generation, based on historically contingent factors, and what one might call the Zeitgeist. “Every generation projected the rabbis in accordance with the burning social issues of the day,” he stated.

For example, late eighteenth- and nineteenth-century maskilim interpreted Talmudic rabbis in light of the Haskalah. Pro-rabbinic maskilim praised the sages as models of educational reform, encourager 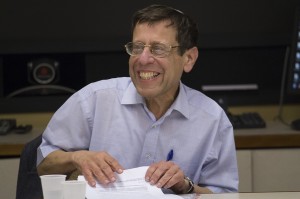 s of agriculture and proponents of speaking the dominant state language; detractors lambasted the sages for “fossilizing” the Jewish legal code, making the laws unchangeable except via an (impossibly) greater Jewish court. The writings of some maskilim express ambivalent attitudes towards the rabbis, employing criticism but also claiming that rabbinic intellectual achievements surpassed those of the surrounding non-Jewish culture. Other nineteenth-century scholars were concerned with maintaining a respectable, intellectual image of the rabbis in the eyes of non-Jews.

Another nineteenth-century debate about the rabbis surrounded some of the sages’ allegedly superstitious beliefs–a cardinal sin, according to diehard rationalists. Some modern rabbis came to terms with the superstitious pronouncements by claiming (inaccurately) that the superstitions in question were found exclusively in the Babylonian Talmud. The rabbis in Babylonia may have been influenced by surrounding superstitious Babylonian culture, claimed the rationalists, but the Palestinian Talmud was free of irrational contamination. (Gafni mentioned that this interpretation also attracted Reform leaders such as Abraham Geiger, who sought to discredit Orthodoxy through discrediting the Babylonian Talmud, on which traditional Jewish practice is based.)

During the questions period, Gafni fielded a question about his own opinion on the rabbis of late antiquity. Gafni explained that although “there is such thing as a rabbinic world,” he–like his teacher, the late Professor Ephraim Urbach–views the Talmudic sages (commonly referred to collectively as Chazal) as individuals rather than as a corporate entity.  “I believe they were independent thinkers who could think for themselves,” he said. 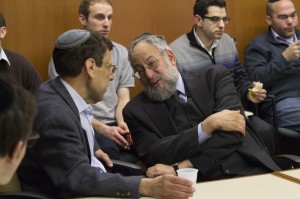 budding scholars…not to impose yourself” on the texts they study. Moreover, he stressed the difficulty in coming to objective conclusions about what the Talmudic rabbis were really like; according to Gafni, rabbinic literature is not necessarily the most objective source–the rabbis had their own ideas about how they wanted to represent themselves–and our knowledge about the late antique period is limited.

“I’m not saying history can’t be done,” said Gafni. “…[b]ut you have to know how to work with the text…in comparison to outside information [such as literature and archaeology] and see which texts have a propensity for preserving historical reality.”

The event was co-sponsored by the Bernard Revel Graduate School of Jewish Studies, the Center for Jewish Law, and the Yeshiva College Jewish Studies Faculty Colloquium.

This article was written by Yaelle Frohlich (Revel ’12)