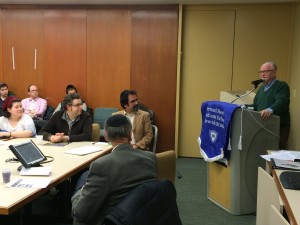 On Monday, February 10th, Yosef Kaplan, Professor Emeritus at the Hebrew University of Jerusalem and world-renowned historian of the western Sephardi diaspora delivered a special Revel guest lecture, “The Challenges of Circumcision in the age of the Marranos.” Prominent among Kaplan’s accomplishments and awards is his receipt of the Israel Prize in 2013, which in the words of Dean Berger in his introductory remarks, “is the closest thing that Jewish studies has to a Nobel prize.”

Kaplan began by explaining that, having lived under the Inquisition, most of the conversos who left Iberia for the centers of western Sephardi diaspora throughout the seventeenth and eighteenth centuries had not been circumcised before settling into these newly formed Jewish communities. Furthermore, not all conversos who left the Iberian Peninsula during this period did so in order to live fully Jewish lives. Many were simply travelling for business purposes, seeking safe haven following political upheaval, or escaping the discriminatory statutes of pureza de sangre (purity of blood).

While conversos settling in the Sephardi communities in Amsterdam, Hamburg, Livorno and London underwent circumcision, many remained uncircumcised—even while choosing to become members of the Jewish community. Throughout the seventeenth and eighteenth centuries, community leaders enacted regulations to contend with this phenomenon.

As early as 1630, the Bet Israel congregation in Amsterdam crafted a regulation forbidding entry to the synagogue to 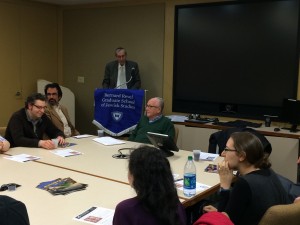 any man who was not circumcised by the upcoming Yom Kippur. They gave future arrivals a two-month grace period after which they would be banned from the synagogue. Further regulations threatened congregants with excommunication if they came into contact with those who refused to be circumcised. (While the records of the other congregations in Amsterdam have not survived, Kaplan assumes that they passed similar regulations.)

“For the converso arrival,” Kaplan explained, “the first period of contact with the community was a liminal stage in which the transition to his new Jewish identity had yet to be decided. Circumcision was intended to remove the converso from this undefined situation, and his agreement to accept the sign of the covenant was interpreted as a final decision to join Judaism.”

While the established community leadership in Amsterdam acted decisively, the newer Shaar Hashamaim community in London struggled with the question of how to deal with members who remained uncircumcised but kept other Jewish precepts. A year after its founding in 1664, Rabbi Yaakov Sasportas banished uncircumcised congregants from the synagogue. But after his departure a year later that ban was lifted. In fact, the men of the maamad (the governors) in London refrained from restricting contact with them through excommunication, for fear of “damaging the business enterprises” of full-fledged community members. On the other hand, in 1678 the maamad decided to excommunicate anyone who participated in the wedding of an uncircumcised man with a woman of the community. Nonetheless, when the man in question was wealthy, the maamad was powerless to prevent the marriage.

According to Kaplan, many conversos resisted circumcision because they, like many Iberian New Christians, believed that one who is uncircumcised is exempt from fulfilling the commandments, and that only from the day of circumcision onward would his sins be counted. Such “latitudinarian views,” as Kaplan termed them, threatened the religious fabric of the communities of the Sephardi diaspora. In seeking to exclude the uncircumcised, community leaders were defining their communities as being fully faithful to Judaism.

However, Kaplan clarified, we should not interpret the requirement of circumcision as being one of halakhic conversion to Judaism. These communities—which were founded entirely by former conversos—welcomed any prospective returnees who simply claimed to be descendants of conversos or members of the nação (the Portuguese Hebrew Nation), without an actual conversion, even though rabbinic opinion prevalent in the contemporary responsa required all returning New Christians to undergo halakhic conversion. Kaplan likewise noted that the requirement for returnees to immerse in a mikveh was not for the purpose of conversion, but rather to purify themselves for having lived as Christians.

Turning to the rabbinic sources of the time, Kaplan showed that they echo the laity’s notions about circumcision as well as the struggle to compel recalcitrant men to undergo brit milah. Many western Sephardi rabbis in the early modern period emphasized the centrality of circumcision, elevating it to a status higher than any other commandment. Circumcision was described as the gateway to the Jewish faith and a requirement for salvation (akin to the Christian view of baptism), reflecting the sacramental character it had obtained. The sixteenth-century rabbi Yitzchak Caro went so far as to rule that one who is not circumcised is not a Jew.

Noting that the lecture had focused solely on the role of circumcision in the absorption of male conversos into the community, one of the members of the audience asked whether there was a parallel ritual for New Christian women 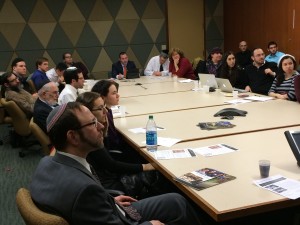 through which they would profess their attachment to the Jewish faith and attain full status within the community. Kaplan responded that there are no records of a parallel ceremony for women; conversa women, it would seem, were accepted immediately into the community. “They were quite liberal towards women, and more severe towards men who were considered the major agents,” said Kaplan in response. Illustrating the relative marginality of women in these communities, Kaplan cited a source relating that unmarried Sephardi women in Amsterdam attended synagogue only once a year, on Yom Kippur.

Responding to another question, Kaplan disagreed with Ben Zion Netanyahu’s opinion that beginning in the fifteenth century rabbinic authorities sought to disenfranchise conversos from the Jewish nation because they had become too distant from Judaism. Kaplan maintains precisely the opposite: it was because the conversos were so close to other Jews and in many ways indistinguishable from them that the rabbis, such as Rivash, felt a need to create a demarcation separating between fully practicing Jews and conversos who still kept Jewish rituals but ultimately were not completely Jewish. Similarly, Kaplan concluded, the efforts of the western Sephardi diaspora to make circumcision a prerequisite for membership in the Jewish community was a way of proclaiming “although we have much in common with conversos, we are not the same.”

This article was written by Mayer Juni (Revel ’14).