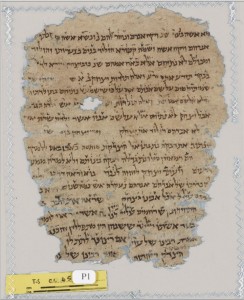 The Bernard Revel Graduate School was pleased to welcome back alumna Dr. Shana Schick (BRG ’11) to deliver a special guest lecture on Tuesday evening, February 25th.  Dr. Schick was the first woman to earn a doctorate in Talmud from Revel and is currently a post-doctoral fellow at The Center for Inter-disciplinary Research of the Cairo Genizah at Haifa.  While the academic community is well aware of the Genizah, one of the goals of Schick’s program is to bring it to the public’s attention and share insights into its significance through various educational frameworks. Her lecture, “Midrash Reishit HaParshiyot: A Genizah Discovery,” presented some of her research findings through a close reading of a particular midrashic fragment.

As background, Schick explained that the Genizah was a storehouse in the Ben Ezra Synagogue in Cairo containing thousands of Jewish texts dating from the 9th to 19th centuries preserved due to the climate—and because of local 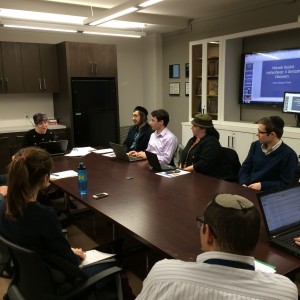 superstition that anyone who remove its texts would be cursed. According to halakhah, only sacred texts must be consigned to a genizah; but the Cairo Genizah contained a wide range of texts preserved simply because they were written in Hebrew characters—including texts in Judeo-Arabic and even Yiddish.  Schick quipped that “it was fortuitous for us that they didn’t know too much about what goes in a genizah” because the Cairo Genizah provides a uniquely rich and tangible way to connect to the past and thereby offers an invaluable window into the social, cultural, and intellectual world of medieval Jewry.

One of the first documented westerners aware of the Genizah was Simon van Gelderen, a German traveler and book dealer who saw it in 1753.  In the late 19th century, Abraham Firkovitch removed many documents from the Genizah and brought them back to Russia, where they now make up the Leningrad Genizah collection. One of the most important purchases of Genizah fragments was by the Scottish Giblew 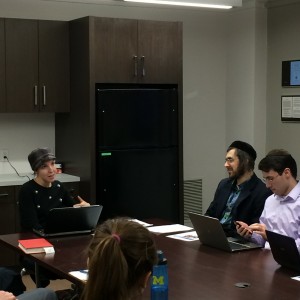 sisters who found among its documents a Hebrew version of Ben Sira. They brought the Genizah to the attention of Solomon Schechter, who realized its significance and was granted access to the roughly 140,000 documents stored in the Genizah in exchange for renovating the Ben Ezra Synagogue. Schechter’s estimate that it would take more than a century just to catalog the many documents of the Genizah has proven correct. Moreover, as Schick noted, scholars to this day are studying these remarkable texts to uncover new facets of medieval Jewish society.

Schick then engaged in a close reading of passage from Midrash Reishit HaParshiyot (MRP), a large midrashic compilation known only from the Cairo Genizah. Dating from the turn of the first millennium, it contains homilies on the beginning of most of the weekly parshiyyot in Genesis, Exodus, and Leviticus. MRP manifests both Babylonian and Palestinian elements. Although it follows the Babylonian annual cycle of weekly parshiyyot (as opposed to the triennial Palestinian cycle), it contains the structural elements of classical Palestinian homilies: an introductory proem, followed by biblical exegesis, followed by words of consolation and comfort.

As an anthology, MRP is made up of pre-existing midrashic sources. Yet Schick argued that their selection and arrangement in a seemingly intentional manner demonstrates the ingenuity of the redactor. In the text she analyzed, from the opening to Parashat Toldot, Schick pointed out many of these creative features, such as the repetition of key words that unify the text, thematic links, and structural transitions. The passage under discussion focuses on the behavior of the patriarchs and matriarchs, especially when faced with the challenge of barrenness. Schick noted how the MRP redactor selected earlier midrashic sources that manifest a feminine perspective, painting the matriarchs in a

positive light, while exhibiting a critical attitude toward the patriarchs. Noting that other Genizah sources likewise promote the perspective of women and other traditionally marginalized groups, Schick hypothesizes that the eventual loss of these works “was no coincidence,” and reflects a sort of “traditionalist” Jewish self-censorship—whether conscious or unconscious. Recovering these perspectives offered by the Cairo Geniza thus not only enriches our library of medieval Jewish works, it also provides a cultural window into an otherwise lost Jewish past.

This article was written by Aliza Storchan, a Bible MA student at Revel.