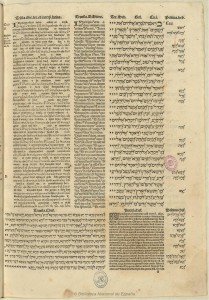 Among the masterpieces of Renaissance printing are two multi-volume Bibles presenting multiple different ancient versions of Scripture (Latin, Greek, Hebrew, Aramaic) in parallel columns across the page, so-called Polyglot Bibles. These Bibles were monuments to intellectual and technical collaboration between the scholars and print professionals who produced them. Since the Hebrew and Aramaic texts they edited and printed had been transmitted for centuries not by Christians but by Jews, these Polyglot Bibles also represented the exploration by Renaissance Christian humanists of medieval Jewish traditions of textual transmission. In so doing, these Bibles are testimonies to the profound Jewish-Christian encounter around the texts both traditions ostensibly share, and to the impact of print and different civilisations of the Book. This workshop will explore these issues by looking at the Complutensian Polyglot Bible (1514-1520) from theNew York Public Library’s collection.

On Friday, April 25 at 10:30 am Visiting Scholar Jesús de Prado Plumed (UPenn/UNAM), in connection with Prof. Jeffrey Freedman’s “History of the Book” Class and Prof. Ronnie Perelis’s “Honors Medieval Jewish History” course, will explore the inner workings of one of the most ambitious and ground-breaking Bible translations.

Jesús de Prado Plumed was born in Madrid (Spain) and grew up in its suburbs. He took his five-years BA in Hebrew and Arabic from Universidad Complutense de Madrid (2001) with one year (1999-2000) spent as an Erasmus-Socrates Visiting Student at the University of Cambridge. He holds a diploma in Arabic from Institut Bourguiba des Langues Vivantes, Université de Tunis-El Manar, Tunisia (2002), DEA in Semitic Studies (specializing in medieval history and Jewish Law) from Complutense (2003), MA in Jewish Studies, University of Manchester, UK (2005), MPhil in Medieval Studies, École Pratique des Hautes Études-Sorbonne, Paris (2006). In the spring 2014, he will defend his PhD thesis, awarded as a joint degree by École Pratique and Complutense. His doctoral research examines the corpus of mostly bi-graphic (Hebrew-script and Latin-script) 30 manuscripts written by converso Hebraist Alfonso de Zamora (d. ca. 1545), the first ever appointed Hebrew professor of what is now the Universidad Complutense, marking an uninterrupted history of 500 years of Hebrew scholarship in Spain. Alfonso de Zamora was one of the Hebrew and Aramaic editors of the Complutensian Polyglot Bible (printed 1514- 1517). Since 2011, he has lived in Mexico, where he has taught Medieval Jewish History for the MA in Jewish Studies at Universidad Hebraica de México, a Jewish private college that is the only degree-awarding institution of its type in Latin America. For the year 2013-14, he is the Maurice Amado Foundation Fellow at the Herbert D. Katz Center for Advanced Judaic Studies, University of Pennsylvania. He has worked as an associate researcher for the following research projects: the new catalogue of Hebrew-script manuscripts from the National Library of France (2005-2006), led by Prof. Colette Sirat; the “Books within Books” project, cataloguing Hebrew fragments found in bindings of rare books all over Europe, led by Prof. Judith Olszowy-Schlanger (ongoing); and the classification and first conservation measures applied to a largely modern Genizah found in an archaeological excavation in Figuig, Morocco (2008). He has published articles and reviews in scholarly journals about Jewish Law, medieval Jewish history in Iberia, Karaites in the Cairo Genizah and early modern Christian Hebraism. His two forthcoming publications will discuss the social setting of commissioning Hebrew manuscripts in post-1492 Spain and an examination of Christian Hebraism in colonial Mexico through book lists from Archivo General de Indias, Seville.