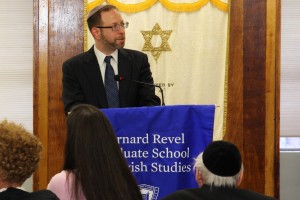 Revel celebrated its 48 MA Program graduates of 2013-2014 at the school’s annual Year-End Student-Faculty Reception on May 28. The event took place on the Wilf Campus, utilizing Revel’s new Graduate Lounge and Dean’s Suite on the third floor of Furst Hall. The event brought together students, faculty, and new graduates and their families. 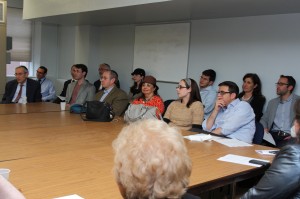 In his address to attendees, Dean David Berger stressed the academic qualifications of Revel students and alumni that make the school so scholastically unique. “There is no other graduate program with a substantial body of students who can almost all confront the classical sources of Judaism in their original languages with the knowledge and sophistication that you bring to your studies,” he stated. “It is a pleasure–even an honor–to teach you.” 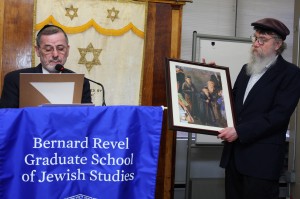 The first part of the program featured a special presentation by Revel’s senior adjunct Visiting Professor of Jewish History and Literature Sid Z. Leiman to retiring YU Judaica librarian and collector Zalman Alpert, who has served as an indispensable resource for Revel and other YU faculty for over 35 years. Leiman presented Alpert with a framed print of Rabbi Akiva Eger’s portrait–noteworthy, according to Leiman, for its original having been painted from life rather than imagination. 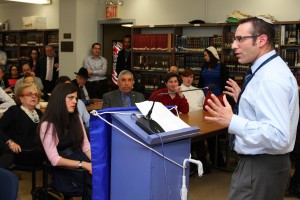 Next, Revel Associate Professor of Jewish Philosophy Daniel Rynhold delivered a “mini-lecture” on the philosophical context of Rabbi Joseph B. Soloveitchik’s Halakhic Man. Rynhold noted that, compared to Maimonides’ Guide for the Perplexed–which begins by stating what Maimonides (and many others) believed to be indisputable facts–Soloveitchik’s work, which describes day-to-day life as a religious person, might not even seem like philosophy. Rynhold argued, however, that Soloveitchik’s approach was actually a response to the philosophical (Nietzschean) questions of the nineteenth and early-twentieth centuries, which challenged the relevance of religion to everyday life. 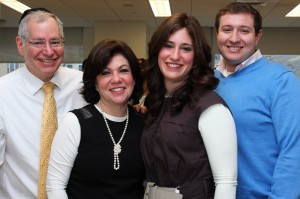 The second part of the Reception focused on Revel’s graduating class. Associate Dean Mordechai Z. Cohen recognized each graduate in attendance by name, and the class representative, Bible MA Ahuva Gold Wiesenfeld, delivered a short address that tied together the weekly Torah portion of Ba-Midbar, Ancient Near-Eastern scholarship and Revel’s contribution to her and her classmates’ scholarly development.

The program concluded with a graduation video presentation and an invitation to graduates to join the new Revel Society as alumni:

To read some of our 2014 Graduate profiles, click here.

This article was written by Yaelle Frohlich (BRGS ’12)