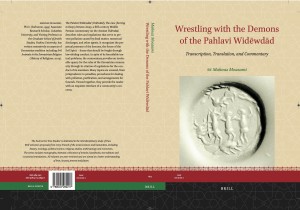 We congratulate Prof. Mahnaz Moazami, who has regularly taught Middle Persian at Revel for many years, on the publication of a major study.   Some of her courses are taught in conjunction with Prof. Yaakov Elman, whose pioneering work on the interface between Talmudic and Middle Persian culture has transformed the academic study of the Talmudic period in Babylonia.  This book deals with a text that is fascinating in itself but also sheds light on the similarities and differences between the  legal and ideological world of Zoroastrian scholars  and that of the Sages of the Babylonian Talmud.  For details about the book, see http://www.brill.com/products/book/wrestling-demons-pahlavi-widewdad.