Professor Joshua Karlip’s New Book: The Tragedy of a Generation 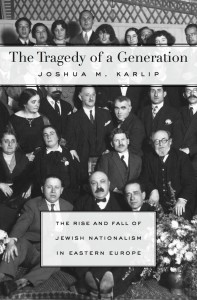 Dr. Karlip’s recently published book, The Tragedy of a Generation: The Rise and Fall of Jewish Nationalism in Eastern Europe (Harvard University Press, 2013) examines the “ideal” of Diaspora Nationalism, a pre-WWII movement seeking Jewish national autonomy within Europe, and its complex relationship to other ideologies such as Yiddishism, traditional Judaism, Zionism and socialism. Karlip, Associate Professor of Jewish History at Revel and Yeshiva College, focuses on three Diaspora nationalist leaders—Yisroel Efroikin, Zelig Kalmanovitch and Elias Tcherikower—from the 1905 Russian Revolution through the movement’s ideological demise with the rise of Nazism and the Holocaust.

Karlip’s work has garnered outstanding praise in the AJS Review, Foreign Affairs, and East European Jewish Affairs. According to one reviewer, Ezra Mendelsohn (Hebrew University of Jerusalem, in East European Jewish Affairs), “Karlip leads us, in some detail, through the permutations, the seemingly endless shifts of opinion, and the bursts of pessimism and optimism that characterised the advocates of the autonomist idea during the period between the two Russian revolutions and during the interwar period.”

“Karlip does more than just read this familiar trope into the history of Diaspora nationalism,” states another reviewer, Anna Cichopek-Gajraj (Arizona State University, in AJS Review). “He examines the inter-face between Jewish nationalism and religious Orthodoxy and, by doing so, he successfully goes beyond a simple model of rejection and return to religious tradition, and thus beyond a simple dichotomy of the religious and the secular in modern Jewish politics. He shows that secular politics did not simply supersede religion but rather that the two remained in a constant if tense relationship.”