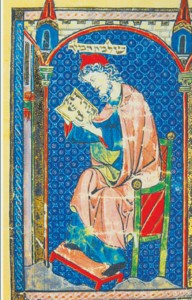 On Monday, November 24 at 7:00 P.M. in Furst Hall – Room 535, Revel will host a guest lecture by Dr. Judah Galinksy, a Senior Lecturer in the Department of Talmud and Rabbinic Literature at Bar-Ilan University, on “Aspects of Lay Piety in the Jewish Community During the 13th Century.” Response by Professor Ephraim Kanarfogel, Revel’s E. Billi Ivry University Professor of Jewish History, Literature and Law. Free parking is available to event attendees at YU Parking Lot (E) – 2497 Amsterdam Avenue, New York, NY, 10033.

Much has been written about the 13th century within general medieval studies as a period when educational institutions, such as the university, developed, and urban centers expanded alongside the concomitant growth of religious piety, especially lay piety. For example, one may note the convening of the Fourth Lateran council in the year 1215 under Innocent III and its role in formulating religious beliefs, as well as its emphasis upon educating the clergy and through them the laity. One can also point to the emergence of the various mendicant orders, the Franciscans and Dominicans, and their preaching mission to uproot heresy and raise the level of religious observance among the laity. In contrast, much less attention has been paid to possible parallel developments that occurred within Jewish society of this period. In his talk, Dr. Galinsky will explore aspects of 13th century lay piety as reflected in the rabbinic literature of this period.

Dr. Galinsky’s teaching and research interests are in the fields of medieval Jewish rabbinic literature, Christian-Jewish relations, book culture and the practice of charity in the Middle Ages. His recent studies include The Significance of Form: R. Moses of Coucy’s Reading Audience and his Sefer ha-Mitzvot (AJS Review), The Evolution of the Monetary-Tithe in Ashkenaz (Journal of Jewish Studies) and The Different Hebrew Versions of the ‘Talmud Trial’ of 1240 in Paris (in New Perspectives on Jewish-Christian Relations: In Honor of David Berger). He is currently working on a book project that focuses on late 13th-century rabbinic culture in Northern France.

The event is sponsored by Nahum and Rina Felman in memory of Dr. Galinsky’s father, Rabbi Mallen Galinsky, z”l.