The recently released movie “Noah” brought together top academic minds on Sunday, November 30, at the Yeshiva University Museum for a symposium titled “Modeling the Flood Story: Midrash and Movie,” presented by the Bernard Revel Graduate School of Jewish Studies, Yeshiva College and YU Museum. The scholars analyzed popular Noah movies past and present in the context of the Torah’s account of Noah, interpretations of 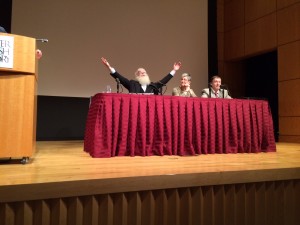 that account in Midrash [rabbinic biblical exegesis], and the flood story as deciphered in clay cuneiform tablets from Mesopotamia.

The 2014 movie, directed by Darren Aronofsky, and written by Aronofsky and Ari Handel, was criticized for deviating from the biblical story by Dr. Irving Finkel, curator and an authority of cuneiform on clay tablets from ancient Mesopotamia at the British Museum. In contrast, Dr. Devora Steinmetz, who serves on the leadership team for special programs at Drisha, said that the movie made her go back to the text. 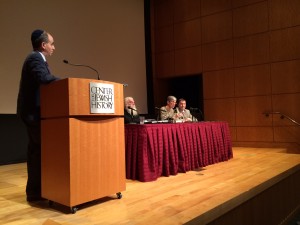 joined by Rabbi Hayyim Angel, instructor of Bible at Yeshiva University, for a panel discussion on the current film and its deviations from the Bible’s narrative.

Finkel was the first to speak at the symposium, comparing the flood narratives in the Epic of Gilgamesh and another Babylonian text. Both were deciphered from clay tablets, thought to have been pressed into clay about 2,000 BCE and discovered in the ruins near Mosul, Iraq in the 1800s CE. His talk was fast paced, backed by projected photos of magnified cuneiform clay tablets and illustrations and photos of a replica of an ark he had built as described in the Mesopotamian text, a coracle, or round boat.

After viewing the clips, Rubinstein noted the movie’s depiction  of Noah having an opiate vision, as opposed to a prophecy as cited in the Bible. Rabbi Angel pointed out that in the Bible, God told Noah “spot-on what to do.”

In an interview preceding the event, Dr. David Berger, Ruth & I. Lewis Gordon Professor of Jewish History and dean of Revel, said the release of the movie “places the famous 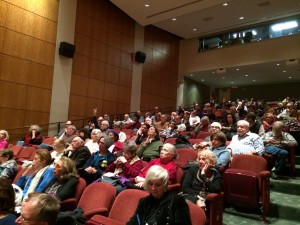 biblical story in the public eye and gives us an opportunity to bring to a larger audience the way classical Jewish texts and tradition present the story.”

Dr. Berger noted that Orthodox biblical scholars have made important contributions in the analysis of biblical narratives from a literary perspective. As to the symposium being held in the Yeshiva University Museum, he said that the “Museum’s involvement fits in to their mission, to use various forms of art to disseminate Jewish content to a wider audience. People who see this film and attend the symposium will have their perspective enriched by exposure to the classical Jewish understanding of this narrative.”