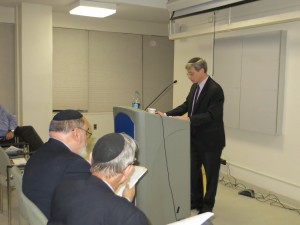 Halakhic texts were shown to “talk” social history at the special Revel lecture “Aspects of Thirteenth-Century Jewish Lay Piety” by Bar-Ilan University Professor Judah Galinsky on November 24. Galinsky, a Revel alumnus, focused on discussions in rabbinic texts that aimed to explain why otherwise observant Jewish men in medieval Ashkenaz did not don tefillin. This was especially problematic because the Talmud (b.Rosh ha-Shanah 17a) states that “a skull that does not don tefillin” will be consigned to Gehenna. Rabbenu Tam sought to remove his coreligionists in Ashkenaz from this classification by suggesting that they were well-intentioned and refrained from donning tefillin because they feared they would be unable to maintain the requisite levels of purity and holiness befitting the tefillin. Subsequent rabbis, including Joseph Bekhor Shor, added that those who did not don tefillin may have been motivated by a sense of religious modesty, and of not wanting to distinguish themselves by publicly observing a commandment neglected by others.

Surprisingly, there is little evidence in twelfth-century halakhic literature that rabbinic leaders of the time made attempts to exhort their coreligionists to don tefillin. But this would change in the thirteenth century. Rabbinic writers such as the author of Sefer Hasidim, Rabbenu Yonah, R. Moshe of Coucy, R. Avraham ben Ephraim, and the anonymous author of Sefer Ha-Hinukh, moralized—and in some cases 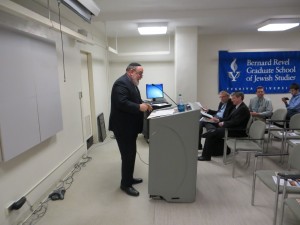 actually preached—about the importance of the obligation of tefillin. Their words were directed especially toward the laity, and they even address the concern (ascribed to the laity by Rabbenu Tam) that tefillin require purity of body and even of thought (according to others). Galinsky argued that this concern of these thirteenth-century authors reflects a new emphasis on lay piety, a phenomenon attested in the Christian world of the time as well, suggesting a common Zeitgeist.

As a respondent to the lecture, Revel Professor Ephraim Kanarfogel cautioned that not all halakhic texts can bear the social-historical scrutiny to which Galinsky subjected them. Whereas Galinsky considered the words of Rabbenu Tam to reflect attitudes actually held by laymen with respect to tefillin, Kanarfogel suggested that the great tosafist and his followers were merely seeking to find legalistic loopholes to rationalize the religious laxity of his coreligionists. In other words, halakhists were not sociologists or pollsters, and their claims about lay practices may have more to do with constructing, maintaining, or modifying halakhic categories than with recording the facts on the ground. In his rejoinder, Galinsky argued that while this might be true of the scholastically-inclined tosafists, in this particular case, other medieval works that are more in tune with actual lay attitudes and practice (sermons, moralizing literature, popular halakhic guidebooks, etc.) voice the same concerns cited by the tosafists. If so, it is plausible that the earlier practice of not donning tefillin indeed stemmed from a sense of unworthiness and humility, a form of popular religion—but one that began to change during the thirteenth century. As Galinsky explained, the uneducated laity did not leave us written works, and historians must extrapolate their religious attitudes and “voice” by reading between the lines written by their scholarly coreligionists. 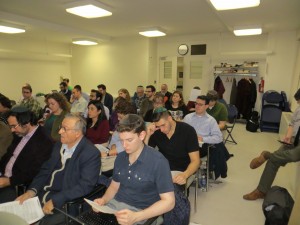 The Q & A session that followed the lecture brought the audience of approximately fifty students, professors, and visitors into the discussion and highlighted the complex relation between halakhic texts and social history.

This Revel event was sponsored by Nahum and Rina Felman in memory of Dr. Galinsky’s father, Rabbi Mallen Galinsky, z”l.

This article was written by Aryeh Tuchman, a Revel PhD student in medieval Jewish history.