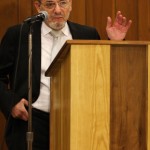 The Rabbi’s Daughter — a Lecture by Prof. Shnayer Leiman

Despite the substantial research done on the Holocaust, there is much we will never be able to know about the European Jewish world it destroyed. Yet new discoveries are still possible—even seven decades later. On Wednesday, January 7, 2015, Prof. Shnayer Leiman presented new evidence of spiritual resistance by a group […]