The Rabbi’s Daughter — a Lecture by Prof. Shnayer Leiman 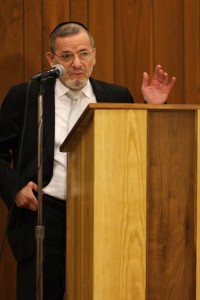 Despite the substantial research done on the Holocaust, there is much we will never be able to know about the European Jewish world it destroyed. Yet new discoveries are still possible—even seven decades later. On Wednesday, January 7, 2015, Prof. Shnayer Leiman presented new evidence of spiritual resistance by a group of women during the Holocaust and succeeded in identifying its two surviving members in a lecture delivered in memory of Mrs. Esther Manischewitz z”l at Congregation Bnai Yeshurun in Teaneck, NJ. The lecture marked the inauguration of the Esther Manischewitz Community Education Fund, which will enable the transmission of higher Jewish learning to the broader Jewish community.

A yellowed Lithuanian identity card dated February 1940 recently came to Prof. Leiman’s attention. This piece of paper, which granted its holder permission to live in Vilna, featured the letterhead of “Yeshivat Maharsha” from Ostrow and the surnames and initials of the two Rashei Yeshiva, Rabbis J. Berkowitz (Berkovicius) and D. J. Chazanowitz (Chazanovicius). 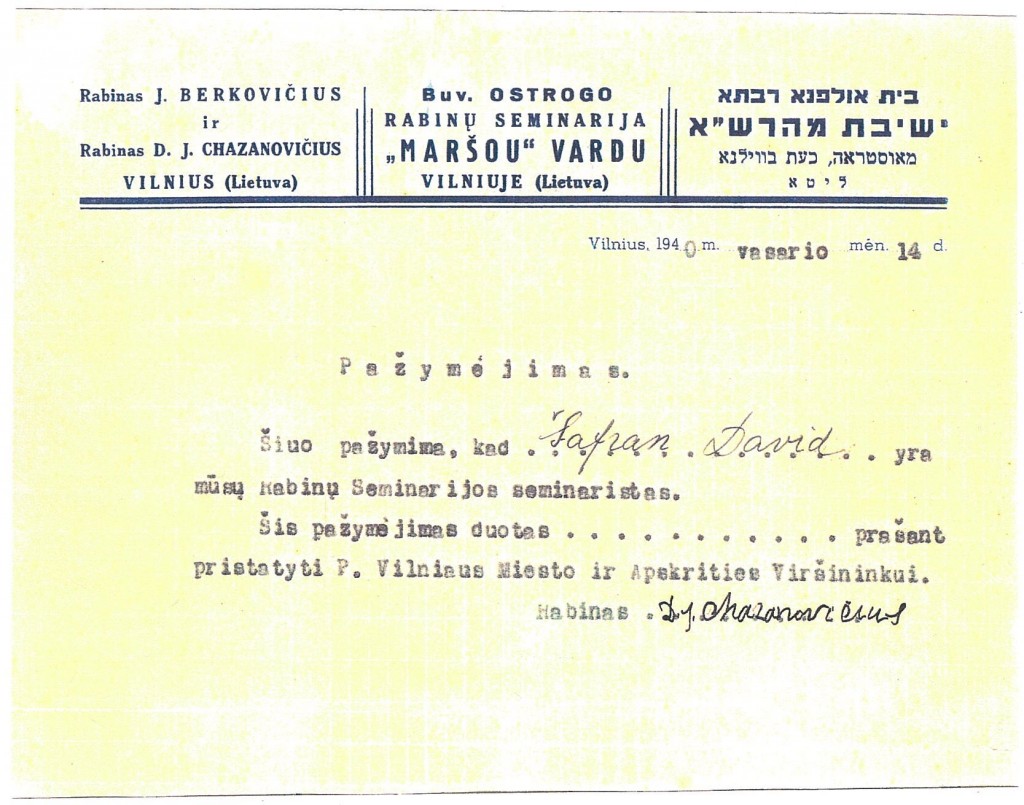 This Ostrow yeshiva was one of many that transferred to Vilna during an eight month period between Hitler’s invasion of Poland and the Soviet Union’s entrance into WWII, during which Stalin granted independence to Lithuania, with Vilna as its capital. Therefore, Rav Chaim Ozer Grodzinski, the preeminent rabbi in Vilna and one of the leaders of Lithuanian Jewry, instructed Polish yeshivot to relocate to Vilna. In a list held in the YIVO archives cataloging these yeshivot (reproduced in Anonymous, בסופה ובסערה , second edition , Bnei Brak, 2000, pp. 395-396), Yeshivat Maharsha from Ostrow is indeed recorded as having moved to Vilna along with 57 students.

What became of the yeshiva after moving to Vilna is unknown, but in a memoir written by Joseph Foxman, who survived the Vilna Ghetto (and lived to become the father of the ADL’s Abraham Foxman), Prof. Leiman discovered information which indirectly alludes to figures connected to it. In his memoir, Foxman includes a discussion of “The Circle of Faygele, the Rabbi’s Daughter.” Faygele was the daughter of a Rabbi Trachenburg from Volhynia, and was 21 when she was imprisoned in the Vilna Ghetto. Once there, she organized a group of rabbi’s wives, Beit Yaakov teachers, and students, and formed what became known as the “women’s Beit Midrash.” Faygele and other learned women (and occasionally men as well) would instruct women of the ghetto in Chumash with Rashi and other mefarshim, Pirkei Avot, and even Shulhan Arukh and works of Mussar (all in Yiddish translation). The women’s Beit Midrash operated until 1943, at which point it was broken up by the Nazis and its members were sent to various concentration camps. Faygele herself survived until nearly the end of the war, but ultimately there were only two survivors from the women’s Beit Midrash. (For a full translation of Foxman’s account see Prof. Leiman’s article “Faigel dem Rovs,” in Tradition 45:3, 89-94.)

The names of many of the women involved in this study group are given in Foxman’s memoir, including that of a certain “Rebbetzin Berkowitz” and her daughter. With one of the Rashei Yeshiva of Ostrow having been a Rabbi J. Berkowitz, this is the first hint at a possible relation between the Ostrow Yeshiva and the Women’s Beit Midrash of the Vilna ghetto, but the 1970 printing of Foxman’s memoir gives no more information. The original 1957 edition, though, mentions that Rebbetzin Berkowitz and her daughter were the two survivors of Faygele’s learning group. But was this the wife of the Rosh Yeshiva of Yeshivat Maharsha at Ostrow? And what became of her and her daughter after the war? To answer these questions, Prof. Leiman had to venture further afield. 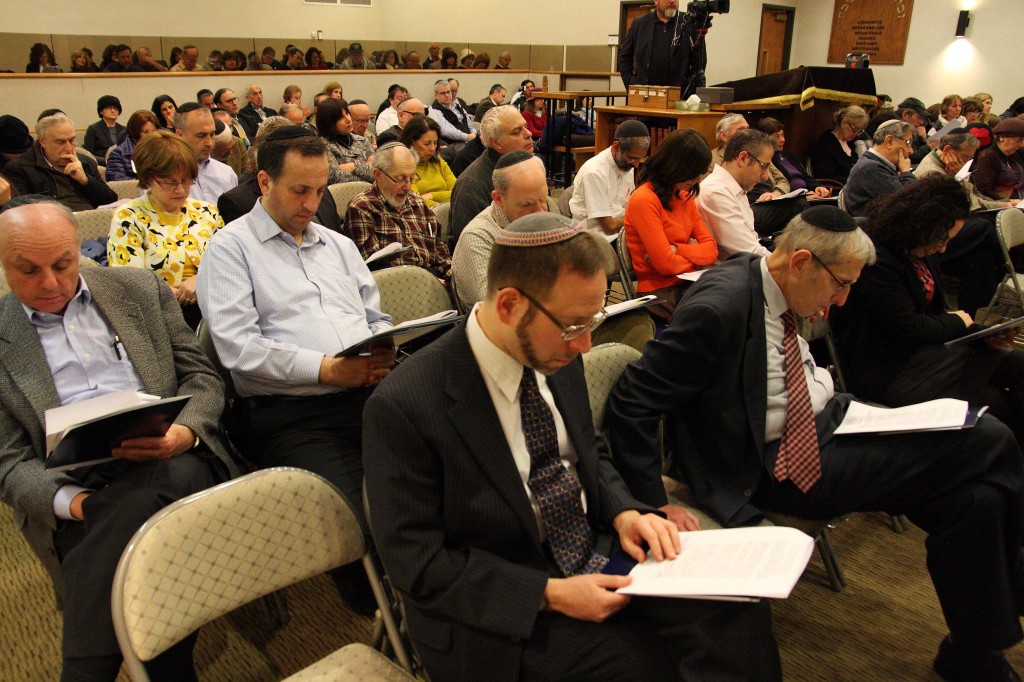 Prof. Leiman first succeeded in identifying the Ostrow Rashei Yeshiva in a rare sefer called Helkat Yosef, originally published in 1938 in Bilgoraj,  (available at http://www.hebrewbooks.org/20328). The author, Rabbi Yosef Berkowitz, acknowledges the assistance of his brother-in-law, Rabbi David Chazanovitz, who shared with him the burden of the administration of Yeshivat Maharsha. The sefer also contains an endorsement letter from Rav Chaim Ozer Grodzinski. Yet the question of the identity of Rebbetzin Berkowitz remained open—until Prof. Leiman consulted the 1959 edition of Helkat Yosef, published by Rav Chaim Yaakov Goldvicht, the founder of Yeshivat Kerem B’Yavneh (available at http://www.hebrewbooks.org/40924). In his introduction to this edition, Rav Goldvicht reveals that the author was his wife Miriam’s father, and that she had survived the Vilna Ghetto with her mother. We also learn of the author’s fate in Rav Goldvicht’s short biography of Rav Berkowitz: he died on Tisha B’Av 1941, along with his brother-in-law the co-Rosh Yeshiva and thousands of other Vilna Jews.

Having solved the mystery of the fate of Rabbi Berkowitz’s wife and daughter, Prof. Leiman concluded his lecture by translating from Yiddish the final lines of Foxman’s essay regarding Faygele—who heroically maintained the women’s Beit Midrash in Vilna during the Holocaust: “May these lines serve as a monument for the unknown grave of a holy Jewish woman who taught others how to live by sanctifying God’s name, and who herself sanctified God’s name. May her memory ever remain sacred.”

This essay was written by Binyamin Weinreich, RIETS ‘18 and Revel ‘16.