Beyond the Books: 2015 Shabbaton Revel Professor Steven Fine to Speak at USC Symposium 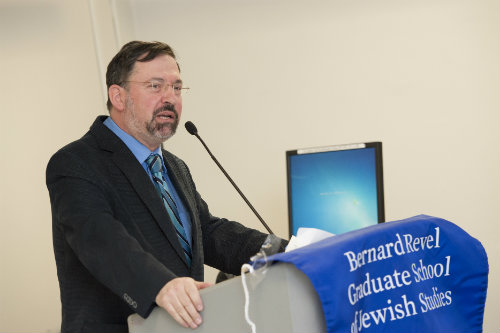 The Gaon of Vilna, Elijah ben Shlomo Zalman Kremer (1720-1797), was the topic of a special Revel lecture on Thursday, February 19th, “Vilna Gaon: Halakhist, Moderate Maskil or Kabbalist?” by Dr. Raphael Shuchat of Bar-Ilan University. This event was sponsored by the Esther Manischewitz Community Education Fund.

As the lecture title itself suggests, the Vilna Gaon’s persona, as well as his multifaceted scholarship and contribution to Jewish learning, are complex.

The persona of the Vilna Gaon is elusive for two reasons. To begin with, he spent his life secluded in the confines of his books, and actually taught only a small group of students. Furthermore, despite his great scholarship, the Gaon published nothing in his lifetime. His marginal glosses on the classic works of Judaism— such as the Bible, the Talmud, and Shulhan Arukh— were published after his death by his students. The only independent book (i.e., not a commentary) of the Gaon’s is Ayil Meshulash, a work on trigonometry published from his manuscript posthumously. The many other books attributed to the Vilna Gaon were actually compiled by his students—our only source of knowledge regarding the persona and scholarship of the great sage.

The first of the Gaon’s printed works was his commentary on Proverbs, published by his student Rabbi Menachem Mendel of Shklov, who in some of his later introductions celebrated the breadth of his teacher’s learning, including secular disciplines, such as mathematics and astronomy. The appearance of that biographical side of Gaon, troubled Rabbi Hayyim Volozhin—considered by many to be the Gaon’s main disciple—who wished to keep the Gaon’s interest in science and mathematics private. As Dr. Shuchat explained, Reb Hayyim was wary of what he considered to be misleading portrayals of the Gaon’s orientation. He therefore composed the introduction to the next publication of the Gaon’s writings: Shenot Eliyahu, his commentary on Seder Zera‘im (1799). There, Reb Hayyim describes the Gaon as a scholar singularly dedicated to Torah study, constantly donning tefillin, always remaining within the “four cubits of halakhah.” Conspicuously absent is any reference to secular learning. In contrast, Rabbi Israel of Shklov, in his introduction to Pe’at Hashulhan (the commentary of the Gaon on Shulhan Arukh), emphasized the Gaon’s knowledge of secular wisdom, echoing the depiction by Rabbi Menachem Mendel of Shklov. Likewise, Rabbi Yehuda Leib, the Gaon’s son, and his nephew Rabbi Yaakov Moshe of Slonim wrote an introduction to Be’urei HaZohar (commentary on the Zohar) that prominently mentions the expertise of the Gaon in astronomy, astrology, and algebra.

Some of the Gaon’s students acknowledged his expertise in secular wisdom, but found other ways to marginalize that aspect of his legacy. Rabbi Yitzhak Haver and Rabbi Eliyahu Rogeler, in  their separate works dedicated to disseminating their master’s learning, denounced secular studies as an ideal: though the Gaon himself learned secular sciences, that path was permissible only to him, due to his outstanding level of Torah knowledge; others, however, must restrict themselves to studying the Talmud alone.

Through these examples, Dr. Shuchat demonstrated the struggle amongst the Vilna Gaon’s students to portray the image of their master in accordance with their own views regarding secular knowledge. Dr. Shuchat briefly pointed to a similar divergence of portrayals of the Gaon’s mystical learning. While all admit that the Gaon studied and commented on kabbalistic works such as the Zohar and Tikunei Zohar Rabbi Menachem Mendel of Shklov was the first to to describe the Gaon as a mystic in his own right in the theoretical and ecstatic sense. In fact, the Gaon’s interest in kabbalistic literature created a renewed interest in this often neglected field of Jewish learning. Evidence for the latter can be seen in the many kabbalistic books published in the Gaon’s name in the decades after his death as well as the many kabbalistic works published in Lithuania in the 50 years after his death.

Toward the end of his lecture, Dr. Shuchat noted another dimension of the Gaon’s legacy that was realized only in his students: a strong connection to Eretz Yisrael. The Gaon himself wished to make Aliyah, and even set out to settle in the holy land—but for some unknown reason was forced to return to Vilna. Yet a number of his students did, in fact, settle successfully in Eretz Yisrael.

In conclusion, Dr. Shuchat emphasized the multifaceted nature of the Gaon’s profound scholarship, which lends itself to multiple, even conflicting, portrayals— conveyed to us by his different students. The Gaon thus remains today the ever complex mystery, much as he was in his lifetime in Vilna, where, despite being a pillar of the community, his true essence was inscrutable, and his rich legacy irreducible to simple classification.