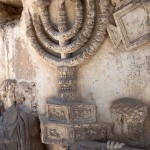 Most people believe that ancient Greek and Roman sculpture was colored white. Recent scholarship has shown that this assumption is incorrect, as the polychromy of ancient art has been revealed and reconstructed.

Revel professor Dr. Steven Fine has been at the forefront of this research in terms of the Roman and the Jewish past as a participant in the Virginia Museum’s research on its Caligula, on color in Jewish thought and visual culture of late antiquity, and now the polychromy of the Arch of Titus.  In 2012 his team discovered the original yellow paint of the menorah, and plans are in the works for continued research on the polychromy of the Arch in the near future.

The USC symposium, titled “The Colors of Imperial Rome:  The Richmond Statue of Caligula & the Arch of Titus in Rome,” reassembles members of the original Caligula team, Peter Schertz, John Polini and Dr. Fine, to discuss the significance of polychromy in Roman art.  Schertz and Fine are both alumni of the department of Art History at USC, where Dr. Fine wrote his MA in Art History. It will be filmed by YU Global, for inclusion in their upcoming documentary and Coursera course featuring Dr. Fine’s work on the Arch of Titus.