The Holocaust Averted: Conversation and Book Launch with Prof. Gurock

“What If” in American Jewish History and Contemporary Jewish Life

Join the audience as Professor Gurock and Rabbi Golub explore many reasonable historical alternatives grounded in what is actually known about the tumultuous, catastrophic and climatic 30 years that bridge the beginnings of the Holocaust, the rise of the State of Israel and Israel’s triumph  in the Six Day War, and what this novel approach to history tells about the real world that Jews live in today. 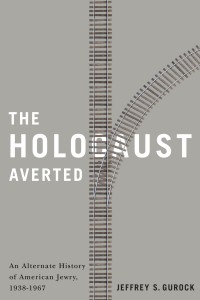 Admission is free of charge, however reservations are required at www.yu.edu/whatif.

The Holocaust Averted has already been lauded as a “provocative, path- breaking book… filled with familiar characters in unfamiliar and intriguing roles that is sure to challenge—and, quite possibly, to infuriate readers.”

This intriguing work considers what might have happened to the Jewish community in the United States if the Holocaust had never occurred and forces readers to contemplate how the road to acceptance and empowerment for today’s American Jews could have been harder than it actually was. Watch this short clip of Professor Gurock discussing his inspiration for writing this book: