Year-End Reception, May 20th at 4pm New Article by Leonard Grunstein of the Revel Board of Overseers

Review of Discussion with Professors Karlip, Olson and Moss 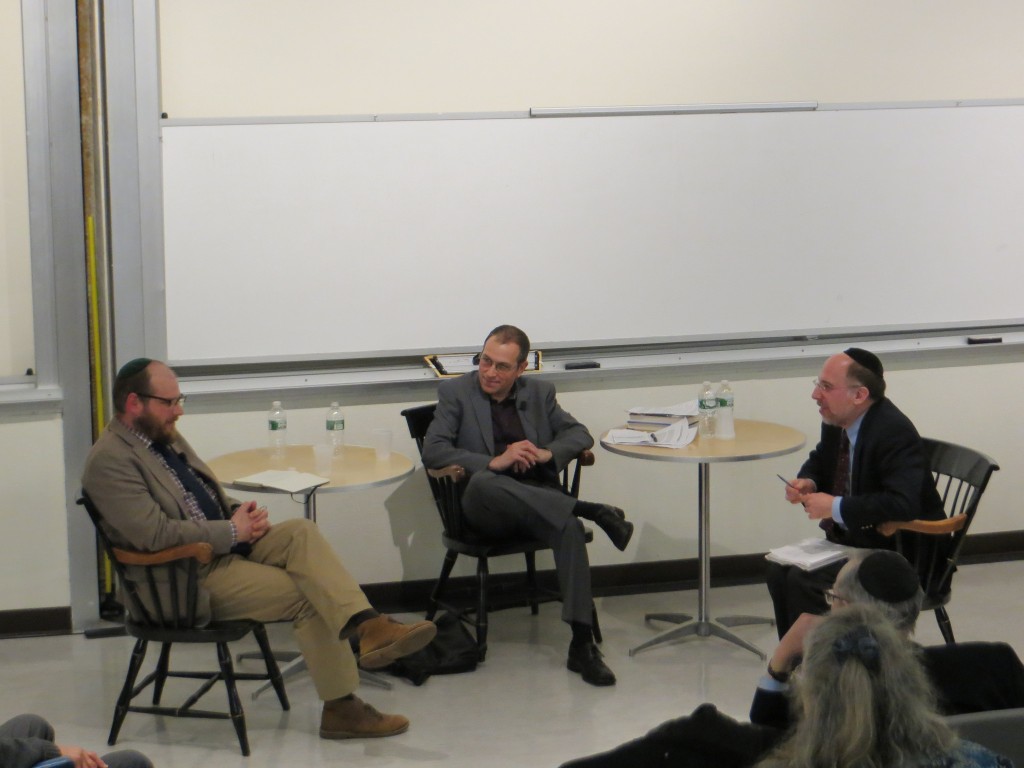 On Thursday, April 30, the Bernard Revel Graduate School of Jewish Studies hosted “Shifting Jewish Identities and Ideologies From the Dawn of the 20th Century Until the Shoah,” a discussion focusing on two recently-published books by Revel faculty: Dr. Jess Olson’s Nathan Birnbaum and Jewish Modernity (SUP, 2013) and Dr. Joshua M. Karlip’s Tragedy of a Generation: The Rise and Fall of Jewish Nationalism in Eastern Europe (HUP, 2013).

Both works explore how and why certain twentieth-century Jewish leaders moved between different ideologies throughout the course of their lifetimes. Olson outlined the life of Nathan Birnbaum, a charismatic figure who transitioned from secular Zionist nationalism and Yiddishism to Orthodoxy, while Karlip discussed Elias Tcherikower, Yisroel Efroikin, and Zelig Kalmanovitch, who were immersed in the Diaspora Nationalist and Yiddishist movements in Eastern Europe and many of whose writings can be found in the Yiddish journal Oyfn Shedveg.

Dr. Kenneth Moss, Associate Professor and Felix Posen Chair of Modern Jewish History at Johns Hopkins University introduced and moderated the discussion, and a sizable crowd was in attendance, including Birnbaum’s great-granddaughter Miriam Birnbaum-Kaganoff, as well as descendants of other figures involved in the ideological and political movements under discussion, such as Miriam Oles, a granddaughter of Eliezer Schindler who was a religious writer active in the Bais Yaakov movement and an associate of Nathan Birnbaum.

Moss opened the discussion with a brief introduction and analysis of the books. Olson’s book describes how Birnbaum began as a leading figure in the Zionist Kadima group but then distanced himself from the movement, looking to define Jewish nationhood as something more innate. He temporarily embraced the idea of Jewish self-determination in the diaspora and ran for Parliament in Austria. However, his thought eventually turned to activist Orthodox Judaism and he became involved in the Agudah party. Meanwhile, Karlip’s book outlines the intersecting paths of three Russian-Jewish activists, Tcherikower, Efroikin, and Kalmanovitch. Amid the climate of the Russian Revolution, they aimed to merge Jewish nationalism and socialism. They then attempted to create a vision of Jews as a secular diasporic nation, with Yiddish as its language, until they confronted the failure of their ideas with the rise of Nazism.

Moss elegantly compared the life trajectories of these figures, focusing on their commonality of a transition from a completely secular vision of Jewish nationalism to one rooted in religious tradition. However, Moss also noted the limits of this commonality. For example, he stressed how the difference between Birnbaum’s life in Austria-Hungary and the lives of Tcherikower, Efroikin, and Kalmanovitch in Russia extended far beyond geography; the opportunities and possibilities available to Jews in these two different empires varied greatly. In Russia there was a climate of change through revolution against the government, while in the Austro-Hungarian Empire change came through utilizing opportunities of emancipation, which stemmed from the government. Additionally, the intellectual influences on Birnbaum and the Russian Diaspora Nationalists differed, and Nathan Birnbaum underwent more dramatic ideological shifts–and ultimately adhered to a much more observance-based Orthodoxy–than Karlip’s three subjects, who remained consistently within the general sphere of Diaspora Nationalism.

The remainder of the event involved a lively conversation between the three participants, including a number of questions skillfully answered by Karlip and Olson. Some questions addressed the way the thinkers viewed the link between nationalism and religiosity. Others focused on how the subjects related to larger intellectual trends, their families’ reactions to their work and ideological positions and migrations, as well as their influences and those whom they in turn influenced. The discussion highlighted the nuanced differences and similarities between Tcherikower, Efroikin, Kalmanovitch, and Birnbaum, helping the audience understand how all these figures were simultaneously products of their surroundings and tremendous individuals.

The discussion also went beyond discussing the fascinating lives of Tcherikower, Efroikin, Kalmanovitch, and Birnbaum; it explored the often-unexamined relationship between traditionalist and nationalist Jewish identity. For instance, Olson spoke of a latent national quality discernible in Birnbaum’s later Orthodoxy. Similarly, Karlip stressed how both Jewish nationalists and traditionalists shared a commitment to a unique Jewish national existence. In the words of Moss, the discussion about Tcherikower, Efroikin, Kalmanovitch, and Birnbaum “created a rich map which invited the audience to think across their characters about the nature of Jewish nationalism.”

This review was written by Miriam Pearl Klahr, SCW ’17.