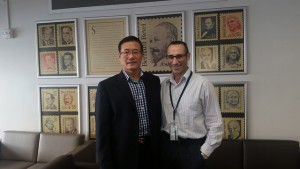 At a special luncheon on Monday, October 12th our PhD students had the opportunity to meet with Dr. Youde Fu, the founder and director of the Center for Judaic and Inter-Religious studies at Shandong University in China. Dr. Fu has been studying Judaism for the past twenty-three years and has dedicated his life to learning about Judaism and Jewish Culture with the goal of making Judaism accessible to the Chinese people.

Dr. Fu did not originally plan to study Judaism. As a graduate student he studied Western Philosophy and wrote his thesis on Spinoza. Several years later, Dr. Fu was commissioned by Oxford University to translate Spinoza’s book on Hebrew grammar into Chinese. Dr. Fu intended to study just enough Hebrew and basic knowledge of Judaism in order to do a successful translating job. While working on the translation he went to Leo Baeck College once a week to study Maimonides. 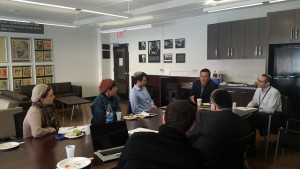 When he started studying Judaism, he immediately realized that this was his purpose in life. Through studying Jewish history, the Bible and Jewish ethics, he realized what an incredible culture and religion Judaism is and that the Jewish people make amazing contributions to the world. He believes it is unfortunate that the Chinese have almost no idea about Judaism except for the negative associations with the term Zionism. His goal is to introduce Judaism to the Chinese people. The Jewish people and the Chinese people each have ancient histories, but each are also people of the modern world. He believes we have so much to learn from each other about how to walk that line between tradition and modernity.

Since his original fascination, Dr. Fu has studied at Hebrew University in Israel, helped translate over 16 essential Jewish books into Chinese, including works of Maimonides, Buber, and Rosenzweig as well as the primary texts of the Talmud and Mishna, and helped start an undergraduate, graduate, and summer program focused on Jewish and religious studies with professors from all over the world. The graduate program at Shandong University now offers courses in Bible, Hebrew language, Talmud, Jewish Philosophy, Jewish history, and more. 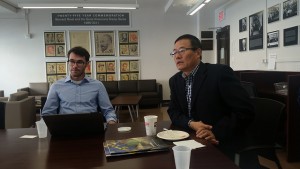 To read the write-up from his presentation comparing Hebrew prophets and Confucian Sages click here.