On October 15, 2015 · In Lectures and Activities, News, Uncategorized 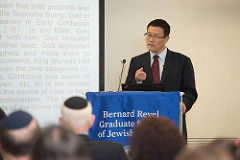 To watch the video recording of this lecture click here.

In our increasingly global society, the opportunities for two distant cultures to interact and learn from each other have become more prevalent. This is not only true within the realms of business and geopolitics, but for the halls of academia as well.

On Tuesday, October 13th, 2015, Dr. Youde Fu, a distinguished professor of philosophy from Shandong University in China, spoke before a packed room, comparing the Hebrew prophets with the early sages of Confucianism. His intriguing presentation was brought to the YU community via a joint effort between YU Global and the Bernard Revel Graduate School of Jewish Studies. Dr. Fu’s speech represented the first Revel event of the year; the first of many lectures and conferences to come. 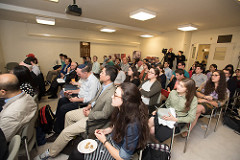 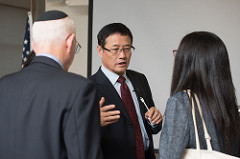 While there are many such similarities, Dr. Fu emphasized that there exists a number of differences between the two groups of traditional figures as well. For example, the Confucian sage, who had spent many years perfecting his characteristics and personality traits, served as the role model of morality for his generation. Indeed, this is one of the central roles of the Confucian sage. On the other hand, while it may be true that the prophets were great people, no claim is made in regards to the moral perfection of the prophets, and their importance stems from their message, as opposed to their character. Additionally, one of the central tenets of Jewish faith is that God communicates with mankind, most directly through the prophets. In contrast, there is an important Confucian belief that “Heaven does not speak.” In other words, the Confucian sages did not receive law or moral guidance through revelation. Instead, knowledge of the laws of Heaven and moral enlightenment was achieved through listening to the people around them, introspection, and careful observation of natural phenomena. Interestingly, a further difference Dr. Fu focused on was that while the prophets are famous for their roles as fierce social critics, especially in regards to abuses of authority, the Confucian sages tended to work towards maintaining the status quo and upholding the traditional social hierarchies. 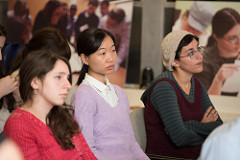 In his concluding remarks, Dr. Fu described his passion for teaching contemporary China about the history, texts and traditions of the Jewish people. He is convinced that the study of Judaism will have a positive influence on modern Chinese people – and from his fascinating presentation, the audience certainly felt that the Jewish community has much to learn from traditional Chinese culture as well. 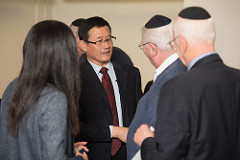 To learn more about Dr. Fu’s passion for Judaism and academic accomplishments click here to read a summary of his fascinating discussion with Bernard Revel’s PhD students.

This review was written by Michael Alweis.