On April 4, 2016 · In Faculty, Student and Alumni Profiles, Lectures and Activities, News 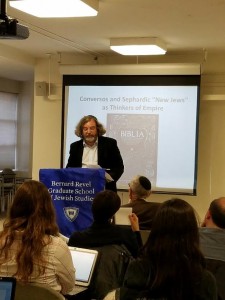 Dr. Stuczynski began with the common view of historian Jonathan Israel depicting New Jews as simultaneously agents and victims of empire.  Through this understanding, Dr. Stuczynski argued, some New Jews – Portuguese traders especially – were heavily invested in the promotion of Iberian imperialism, even as they themselves were persecuted by its spread and influence.  While the Inquisition targeted Jews, the imperialism of the following generation allowed them to become both objects and subjects of its thought.

Portugal’s imperial resurgence, Dr. Stuczynski pointed out, was tied to its mercantile expansion, and conversos played a large role in this.  During the celebrations surrounding King Phillip II’s visit to Portugal in 1619, elaborate arches were dedicated to Portugal’s illustrious past and present, and Dr. Stuczynski highlighted converso roles in this.  Lisbon’s “men of commerce,” an oligarchical group playing a major role in reviving Portugal’s empire, was made mostly of conversos trying to improve their financial standing and demonstrate their fealty to the Crown.  By appropriating symbols of Portugal’s nobility and royalty, most especially the armillary sphere of Portugal’s ruling house, conversos drew attention to Judeo-Christian values and highlighted the external enemy of the Muslim East.