Revel Contributions to Images: A Journal of Jewish Art and Visual Culture Upcoming Lecture: The Ark and the Cherubim

On Monday, April 11, Revel students, professors, and guests were illuminated by Dr. Baruch Alster’s lecture, “What is ‘Peshat’ in the Song of Songs? A Look at an Unpublished Commentary from Rashbam’s School.” Dr. Alster is Senior Lecturer and Bible department coordinator at Givat Washington College in Israel. He received his Ph.D. in Bible from Bar Ilan University in 2007, having written his dissertation on the Jewish commentaries on Song of Songs that focus attention on the human love story. Dr. Alster has since published articles on medieval and modern Jewish interpretation and on literary aspects of the Bible. 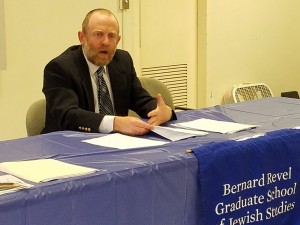 In his guest lecture, Dr. Alster introduced an anonymous manuscript commentary on the Megillot and Haftarot. Originally catalogued incorrectly as Rashi, the commentary on Shir HaShirim, which Dr. Alster termed “Pseudo-Rashi,” bears striking similarities to the Pentateuch commentary of Rashbam. Without taking a definitive position on the authorship of this anonymous manuscript, Dr. Alster observed that both commentaries share the same perspective on staircase parallelism (a discovery that Rashi attributed to Rashbam), the translation of the word “Levanon” (both translate it as referring to “Levonah” trees), and the existence of metonymy in biblical poetry. At the same time, Dr. Alster pointed out several occasions where “Pseudo-Rashi” follows a Midrashic interpretation which Rashbam rejects in his commentary on Chumash.

Dr. Alster argued, based on other passages of Rashbam’s commentary, that both commentators believed in the fundamental validity of Peshat and Midrash, and Pesudo-Rashi chose to include both because the true value of Shir HaShirim lies in its Midrashic interpretation, not in its Peshat. Dr. Alster concluded by noting that the relationship between the two modes of interpretation differs slightly in the two commentaries. Rashbam presents Peshat and Midrash as two entirely separate realms of interpretation, as Peshat requires a philological method, whereas Midrash is based on a close reading of redundancies in the text that are meaningless according to Peshat. For Pseudo-Rashi on Shir HaShirim, on the other hand, the allegorical midrashic interpretation is based on a symbolic reading of the love story in the Peshat.