Review of Dr. Raanan Eichler’s Presentation – “The Ark and the Cherubim” 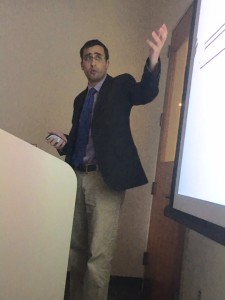 Dr. Raanan Eichler presenting at BRGS on May 10th

On May 10th, Dr. Raanan Eichler of Harvard University delivered a lecture on the Ark of the Covenant in its Ancient Near Eastern context sponsored by Revel and the Center for Israel Studies. Dr. Eichler’s presentation, replete with images of archaeological finds and medieval illuminations, brought the Ark to life for the audience as never before.

Most people familiar with the Bible have an image in their heads of what the Ark of the Covenant looked like, an image which is largely the result of medieval commentaries and contemporary depictions. Modern Biblical scholars too have an idea of what the Ark looked like, but theirs comes from comparing the Ark to other large fixtures in Ancient Near Eastern temples. One current academic conception of the Ark is that it served as a throne or a footstool for God, based on the many statues of deities sitting on carved thrones that archaeologists have found.

Dr. Eichler, however, disagrees with this academically constructed image, because it does not actually fit the Bible’s description of the Ark. In the Bible, the Ark is never described as a throne or a footstool (although it is described as a dwelling-place for God). The Ark is, fundamentally, a box or a chest, meant to hold the Tablets of the Law. Therefore, Dr. Eichler looked at ancient furniture, rather than ancient temple iconography, to illuminate the Ark’s construction.

His research brought clarity to many features of the Ark which have been debated by traditional commentators. For instance, the Ark is described as possessing pe‘amot, a word which elsewhere in the Bible has the sense of feet, but is assumed by all traditional commentators (save Ibn Ezra, who reluctantly bowed to the weight of the linguistic evidence) to refer to the corners of the Ark, since its having feet is never mentioned elsewhere in the Bible. Dr. Eichler showed, however, that Egyptian chests from the Biblical period often did have feet, so that it would not have been unusual for the Ark to have them as well. 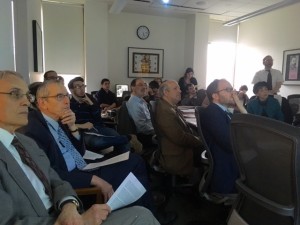 Additionally, commentators have debated whether the rings for holding the Ark’s poles were on the upper edge or the lower edge. Based again on similar objects from Egypt, Dr. Eichler demonstrated that the rings would have been on the bottom of the Ark, keeping in place the poles that supported its weight. Gold rings, being a soft metal, would tear if they had to carry the weight of the Ark from higher up on its surface. Dr. Eichler then showed images of Egyptian furniture borne on four poles, one on each corner at the base, and posited that this arrangement was shared by the Ark, which is never said to have had only two poles. Not only that, but the poles on Egyptian furniture could be pushed through the rings to rest under the legs of an object when it was placed down, as can be seen on artifacts recovered from King Tutankhamen’s tomb. Dr. Eichler hypothesized based on this that the Ark’s poles could be retracted and extended without ever leaving their rings. This provides an elegant solution to a contradiction between verses in Exodus and Numbers which perplexed commentators. The former verses state that the poles cannot be removed from the Ark’s rings, while the latter mention the poles being put “into place,” or in other words, pulled back out.

The talk then moved to the top of the Ark. The kaporet the cover of the Ark, is described as if it is its own object, which Dr. Eichler believes is for the purpose of making clear that the Ark is not the seat of a deity. The verse describes the kaporet as surrounded by a zer, a word which perplexed commentators. Most, including Rashi, translated it as a raised crown, or diadem, likely due to a perceived similarity with the word nezer. The Septuagint, on the other hand, interprets the zer as a twist of gold strands, based on a perceived similarity to the word word moshzar. But by examining Egyptian furniture and altars, Dr. Eichler was able to identify the zer as the cavetto cornice, a design feature extremely common on the tops of Egyptian furniture and ritual objects.

Finally, Dr. Eichler presented his view of the Cherubim which the verse instructs to be made attached to the kaporet atop the Ark. Traditional commentaries disagree regarding their identity, with the possibilities being either two winged children, two winged adults, or some sort of unidentified bird or animal figure. Modern scholarship has identified the Cherubim with winged animal figures often found in Ancient Near Eastern temples, perhaps a sphinx or a griffin. Since many artifacts depict gods sitting on thrones shaped like such creatures, scholars have used this identity of the Cherubim to support the view that the Ark was a throne for God.

However, Dr. Eichler sees Midrash HaGadol’s view that the Cherubim were upright adult human figures with wings as being correct. An animal figure would have to be depicted lying down, and its wings would be too small to cover the Ark. Only humans, who stand upright and have an arm span equal to their height, can have wings which are large enough to provide the canopy described by the Biblical verses and are still in proportion to the body. Rather than serving as a throne for God, the Cherubim guard the empty space on top of the Ark in which God’s presence resides, just as the Bible describes. Winged human figures are also a known motif in Ancient Near Eastern iconography, and many such statues have been found in temples of the region.

Dr. Eichler’s methodology of drawing upon archaeological records of objects similar in description and function to the Ark brought the audience into the ancient world and enabled them to envision how it looked in its setting in the holy Tabernacle.