“The Ark and the Cherubim: Cultic Practice and Ancient Near Eastern Iconography” A Summary of Dr. Eichler’s Presentation on Tuesday May 10th 2016 Read about “The 50th Annual Mickey Marcus Memorial Service at West Point” Published by Revel board member Mr. Len Grunstein

Pious Women in Midrashic and Aggadic Narratives: A Summary of Dr. Tamar Meir’s Lecture at BRGS 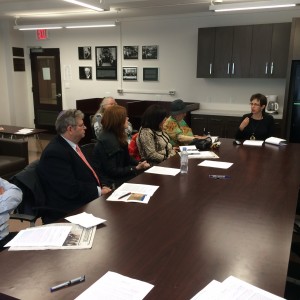 A special visiting lecture, “The Image of the Wives of the Pious in Midrashic and Aggadic Narratives” was presented by Dr Tamar Meir on Tuesday evening May 17 to an audience that filled the Revel lounge. A distinguished scholar of midrashic literature in Israel, Dr. Meir analyzed the number of rabbinic sources—both from Eretz Yisrael and Babylonia—that speak of pious men (hasidim) and their wives. While in most instances little is known about the latter, there are some remarkable cases in which the rabbis discuss the behavior and characteristics of these pious women. Dr Meir noted that scholarship was, generally speaking, not available to women in the ancient period. With rare exceptions, the wives of the rabbinic sages were not learned. But the sort of fervent devotion to, and special connection with, God manifested by the hasidim was not dependent on scholarship. Both men and women could therefore participate equally in this realm of Jewish spiritual achievement. Indeed, while it was completely possible for a great rabbinic sage to be married to an ignorant woman, a hasid could not normally maintain his piety unless he had an equally devout partner—termed hasidah in one rabbinic source cited by Dr. Meir.

Although Dr. Meir kept her academic presentation focused on the ancient rabbinic sources from Talmud and midrash, during the question-and-answer period that followed her lecture she addressed some of the modern implications of her research. In response to one question, e.g., she noted that in the modern Orthodox community today men and women can be equally learned, and so the partnership between the hasid and hasidah attested in the ancient sources can perhaps serve as a model for husbands and wives who both dedicate themselves to the study and teaching of Torah scholarship. Exemplifying this sort of partnership herself, Dr. Meir noted that her husband is a Talmud scholar—whom she thanked for caring for their six children, enabling her to come to the United States to lecture in the areas of her scholarship.

Dr Meir is director of the Literature Department at Givat Washington College and teaches Aggadah in the Masters program in Efrata College. She teaches and researches Midrash, Aggadah, Piyut and Prayer, Chassidic stories, and Modern Hebrew Literature. Dr. Meir is also founder and director of the women’s communal Bet Midrash “Kulanu” in Givat Shmuel, and teaches in the Midrasha at Bar Ilan University. Her book, Tradition Versus Innovation: Redactional Orientations and Deep Structures in Ruth Rabbah, is in press.

Written by Dr. Mordechai Cohen, Associate Dean and Professor of Bible at BRGS