Reconstructing the Yerushalmi through Rishonim 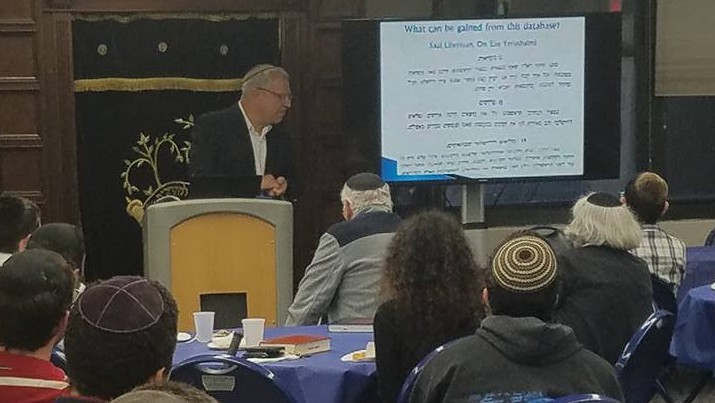 Instead, Dr. Pinchuk explained, the thousands of quotations of the Talmud Yerushalmi in the works of the Rishonim must be used as “tiny snapshots…of manuscript(s) of Yerushalmi.” The later Rishonim themselves were the first to use this method. For example, in order to clarify a difficult line in the Yerushalmi, the Mordechai (Mordecai ben Hillel, the 13th century German Rabbi) quotes a different girsa he found in the Rif (R. Isaac Alfasi, Muslim Spain, eleventh century). At the turn of the twentieth century, Dov Ber Ratner used this method in his volume Ahavat Zion veYerushalayim, which is essentially a directory of qoutations from the Yerushalmi in the Rishonim. Today, the Talmud Yerushalmi Online Database allows one to search for these same quotes online.

Dr. Pinchuk illustrated different ways in which the database can deepen one’s understanding of the Yerushalmi beyond establishing a correct girsa. By comparing different quotations from the Yerushalmi, one can identify trends of its interpretation within the Rishonim. One can also draw conclusions from what is not in the database. For example, there are no references to Yerushalmi tractates of Kodshim or Taharot. If these tractates ever existed, they were lost before the time of the Rishonim.  The database can also help to uncover new lines of Yerushalmi that we did not have in manuscript.