What is Orthodoxy? The Hatam Sofer and R. Nahman of Bratzlav versus Spinoza Kabbalah Practices/ Practical Kabbalah: Magic and the Kabbalistic Tree 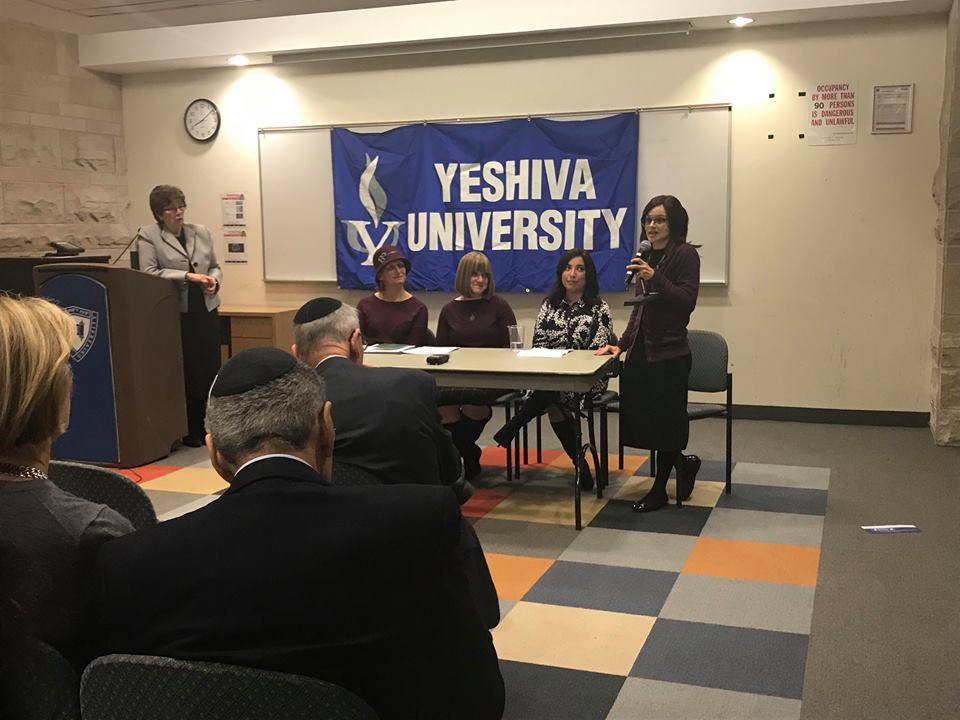 President Berman introduced the evening’s discussion on Women’s Torah Education by echoing words from Rav Aharon Lichtenstein, “Moreover today there is not only greater need for women’s Talmud Torah, there is also greater opportunity.”

The president’s opening remarks were followed by a presentation by Jackie Rosensweig, a PhD candidate in modern Jewish History at Revel. She focused her talk, which coincided with the centennial of the founding of Bais Yaakov in 1917, on explaining how the fledgling Bais Yaakov movement found legitimization.  Starting as one school in Sarah Schenirer’s dress shop, Bais Yaakov grew to a network of schools with 325 branches in 13 countries before the Holocaust. Bais Yaakov schools were reestablished after the Holocaust and thrived internationally. Bais Yaakov also continues to feature in discourse as the precedent for a “major abrupt shift in the position of women in the world of Talmud Torah,” the normalization of Jewish schooling for girls.

While Leslie Ginsparg Klein paints the rise of Bais Yaakov as the success of a grass roots visionary, and contemporary adherents of the Bais Yaakov movement speak of the development of the school system in consultation with rabbinic authority, Jackie offered a middle narrative. She explained that Sarah Schenirer did take the original initiative in founding the first Bais Yaakov school but that ultimately it was the Agudath Yisrael that exponentially expanded the movement. After two failed attempts at attracting high school girls to evening lectures, Sarah Schenirer decided to open a small day school for elementary school girls. Sarah Schenirer did indirectly consult with the Belzer Rebbe before opening her small school. It very well may not have been clear from the question, however, that she intended not to privately tutor girls, but to open a formal institution of schooling. Sarah Schenirer’s initiative came just when the political and religious atmosphere would allow for it. In 1912, Agudath Yisrael become the first politically organized Orthodox entity, viewing itself as a legion of citizens which would help counter the strong assimilationist trend and after the first world war and, help ease the social displacement experienced by so many. At the Rabbinic Conference in Cracow in 1903, Rabbis discussed the need for women’s education, though did not act upon it. 1n 1911, the Chofetz Chaim included a footnote in his Likutei Halakhot encouraging women to learn Chumash, Pirkei Avot, and relevant halakhot. But Sarah Schenirer did what no Rabbinic authority actually had done. She organized in-depth institutionalized Torah schooling for girls. Agudath Yisrael then purchased the Bais Yaakov school system in 1919 and helped develop it into a national and international network of schools with a system of teacher certification.

The evening concluded with the personal reminisces of panelists Mrs. CB Neugroschl, Head of School for Yeshiva University High School for Girls, Mrs. Nechama Price, Director of the Graduate Program in Advance Talmudic Studies at Yeshiva University, and Mrs. Chaya Sima Koenigsberg, PhD candidate at Revel. Each described their own unique connection to and love for Torah study and how Yeshiva University equipped them with the necessary skills to deepen their understanding and continue their exploration of Torah. Mrs. Nechama Price also spoke specifically of the opportunity afforded by Yeshiva University for women to study and teach Gemara and Tanakh at the highest levels. Dean Karen Bacon also emphasized the impact of the Torah education provided at Stern College for Women. Even the many Stern women who, unlike the panelists did not continue within the field of Jewish Education or scholarship, received a Torah education which helps to inform and better their families and communities.

A video of this event can be viewed here: https://youtu.be/o0D1UR4x-_w