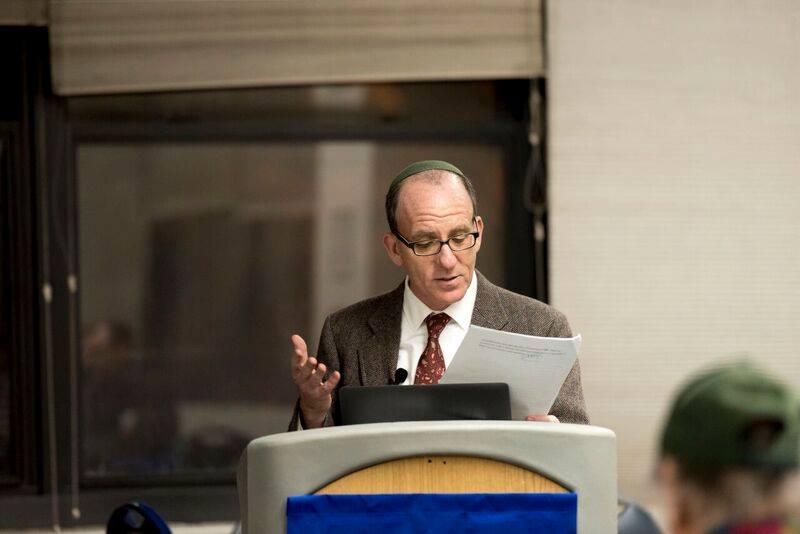 Dr. Yossi Chajes of the University of Haifa directs the Israel Science Foundation – supported “Ilanot Project,” an attempt to study all kabbalistic cosmological diagrams. In this talk, he explained Ilanot and their magical uses. Borrowing the most prestigious schemata from philosophical inquiry, the Tree of Porphyry diagrams of Aristotle’s categories, kabbalists from as early as 1400 depicted their cosmological insights (e.g. the emanation of the Sefirot) in tree- like diagrams, called Ilanot. These Ilanot can be described as iconotexts, composites of text and image. Ilanot were sometimes printed on long scrolls with labeled diagrams and extensive running commentary along the side. These commentaries were related to or reprintings of an early kabbalistic genre, commentaries to the Sefirot. Sometimes, they were instead printed as successive pages in a book or codex. Some Ilanot were printed with rotating circles, volvelles, which the reader could actually physically manipulate in order to construct different combinations and show the fractal nature of the Sefirot.

Most Ilanot are thought to be used as a mnemonic, study aid, and material for meditation. They were also probably considered to draw Divine energy as talismans. Dr. Chajes likened the Ilanot to medieval maps which were thought to enable a virtual pilgrimage to the place represented. The volvelle Ilanot are a specific example of performance which was mandated by the Ilanot.  Dr. Chajes pointed out that parchment scrolls, upon which the Ilanot were often depicted, have a specific resonance within the Jewish tradition. The scrolls of Tefillin, Mezuzah, Megillah, and Torah, are all used for specific Jewish rituals. As such, the very printing of an Ilan on a scroll of parchment signifies that it is ritually important and encourages the reader to “do something” with it, perhaps actively meditate upon it.

While Ilanot were primarily intended for contemplative kabbalah, they were also used for practical kabbalah. Ilanot were commonly fashioned into amulets meant to be apotropaic, to protect against harm. Usually the Ilanot that were intended to be used as amulets deleted the running commentary from the side. They were often miniaturized and worn around the neck. The use of Ilanot as amulets followed a long tradition of using text as image in magic. Earlier examples include using variations of Divine names in magic.