A Striking Tale of Role Reversal and Lesson for our Times by Mr. Leonard Grunstein Rabbis and Classical Rhetoric

Sheiltot & Shakespeare, Bialik & Baldwin: Hebraism and Humanism in the Life of Yeshiva

On December 12, 2017 · In Faculty, Student and Alumni Profiles, Lectures and Activities 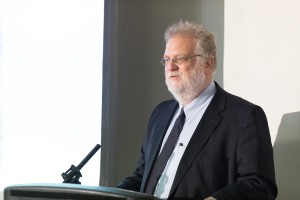 Dr. Yehudah Mirsky, associate professor of Near Eastern and Judaic Studies at Brandeis, spoke in commemoration of the thirty fifth yarzeit of his father Rabbi Dr. David Mirsky and the fiftieth yarzeit of his grandfather Rabbi Dr. Samuel Kalman Mirsky. By reviewing the life and work of these two figures, Dr. Yehuda Mirsky explained how they each played different and important roles within the American Orthodox community. He reflected that Samuel Mirsky represented the depth in Judaism and focused on building institutions to bridge American and Israeli Jewry. David Mirsky represented the breadth of Judaism and focused on securing YU’s place in the world of higher education and bridging Jewish and non-Jewish institutions.

Samuel Mirsky was born in Moldova in 1899 but spent his childhood in Eretz Yisrael, where his family emigrated after the Kishinev pogroms. He was considered an ilui, a childhood genius, and received semikha at age fifteen. As a young adult, he became very active in Zionism, earned his British law degree, and was involved in the earliest conversations about a chevrah l’mishpat ha-iviri, a society for Hebrew law. He taught in the religious Zionist Tahkemoni school. He developed close relationships with Rav Uziel and Rav Kook. In 1920, he moved to America and was soon invited by Dr. Bernard Revel to teach at the  Teachers Institute of the Rabbi Isaac Elchanan Theological Seminary. He also served as the principal of Maagen David elementary school for several years and was the rabbi of the Young Israel of Boro Park. He served as the leading religious figure in the Hebrew Movement of America and was involved in HaPoel HaMizrahi, a religious Zionist organisation that supported the founding of religious kibbutzim and moshavim.

David Mirsky was born in the United States and attended MTA High School and Yeshiva University. As a student, he founded the YC Dramatics Society. He also edited The Jewish Horizon, the journal of the HaPoel HaMizrachi. He earned his doctorate in English literature at Columbia University. He taught English literature at YU and later became Dean of Admissions. He was influenced by Dr. Belkin’s emphasis on fostering higher education and worked to have Hebrew qualify as a language for the College Entrance Examination Board and have the SATs offered on Sunday – to accommodate Orthodox Jews who couldn’t take the exams on Saturday. He was featured on a TV show about minorities in American literature and a co-hosted radio show about issues of college education. He later served as Dean of Stern College, president of Histadrut HaIvrit b’America, and co-chairman of American Professors for Peace in the Middle East. Additionally, he published studies about the life and work of Ephraim Luzzatto (18th century Italy), the father of modern Hebrew poetry.

Dr. Yehuda Mirsky emphasized the ecumenical aspect of both Samuel Kalman and David Mirsky. Both were figures who were able to speak to very diverse groups of people. David Mirsky devoted his life to building YU but had close relationships within the Jewish Theological Seminary and, with the blessing of Dr. Belkin, generously advised Bernard Lander in his founding of Touro College – without any concern for possible competition. Both Samuel Kalman and David Mirsky shared a strong national and cultural self-confidence and a firm belief in the integrity of Torah and human dignity which allowed them to work with the broader Jewish and non-Jewish world.

A video recording of Dr. Mirsky’s talk can be viewed here: https://youtu.be/oUqFwkZGAuk.